From June to November 2002, the MICS field team observed 71 blue whales including 60 known individuals and 11 new. Of the 11 unknown, one was seen off the eastern tip of the Gaspé, another off Sept-Iles and 9 in the Estuary including Chameau's (B103) calf, which subsequently disappeared under uncertain circumstances.

In the Gaspé study area seven known individuals were photographed in late June, early July. Of these both B093 and B383- a new animal in 2001, were re-sighted off Les Méchins along the south shore of the Estuary in September.

In the Mingan/Anticosti study area five blue whales were identified with noted returning visitors B161 and B349 Trauma, as well as B376 and B377 first catalogued in 2001 in this same area

The Forestville to Escoumins region provided us with the usual contingent of blue whales and mostly known individuals. We found Chameau B103 and her calf, Scythe B017, Shiva B124, Jaw-breaker B246, Alacran B122, B244 Symphonie, B235 Kingfisher, B318 Popeye, and Biombre B268, to name but a few of the 37 seen there.

This year we were finally able to learn more about blue whale presence and distribution along the southern shore of the St Lawrence Estuary in the Les Méchins/Matane sector. And this is large part due to Mr. Rene Roy who carried out regular surveys along that coast and sent us photographs over the net. Seeing the number of sightings coming from the Matane region and having recognized two animals that had been off Forestville in mid August, we decided to join Mr. Roy on a patrol. This we did in early September when we felt we had completed our off Forestville. Richard Sears, Thomas Doniol-Valcroze and session participant headed down to Godbout at 05:30 by road towing the inflatable. It was a perfect bright sunny morning and most importantly flat calm, which was essential since we were intending to cross the St Lawrence, which is nearly 30 miles across at that point.

Our enthusiasm was dampened when we found that the tide was dead low in Godbout and the ramp well out of water. We backed the boat down and into the sand, but the water barely touched the stern of the inflatable. We tried a couple fast forward and brake maneuvers with the van hoping the boat might nicely slide off the trailer, but no go. By then we had to push and use several attracted an early morning group of rather large bellied observers, and these were not a local species of shore bird. The first mutterings emitted by our audience soon turned into a loud cascade of suggestions, which we had either tried or saw no need to attempt. After several minutes of this vocal counsel, I pointed out that if they were to descend from their perch and give us a more physical expression of their worth and ideas, that we might in fact be able to get the boat afloat. The large ventral protrusions remain steadfastly in position and returned to muttering, but at least we could concentrate on the work at hand. In the end it simply took Judith's added muscle and resolve to freeze her feet for a minute or two in the welcoming North Shore water, to get the boat in. We quickly parked the van and trailer and headed away from the Godbout mutterers and to the peace offshore.

We called to Rene Roy, but without answer. Hoping he could hear us we simply gave our departure time and course. The ride over the slick mirror was pure joy and we head across fully joined in our day's adventure. As we moved out beyond Pointe des Monts, where estuary and Gulf meet we quickly left its candy striped lighthouse and few harbor porpoise behind. To the west we could see high frontal clouds encroaching slowly on the pale blue sky announcing the arrival of poor weather, but it would hold off until the morrow.

The ride across was relatively quick and within 7miles of Les Méchins we saw our first spout, which to our delight turned out to be the large female blue whale, Crinkle B082, known since 1983. Crinkle was observed 10 days later off Forestville. 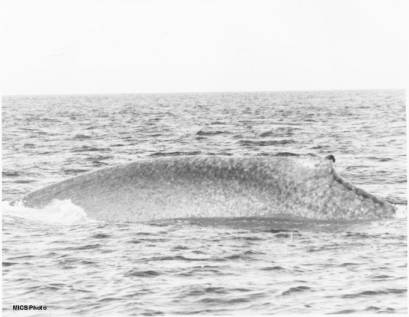 We met up with Rene Roy, who had heard our earlier radio call, and we patrolled the coast from near Matane to Les Mechins. Inshore we found several finbacks and 4 more blue whales, some of which have been mentioned above. There was also Geoccocyx -B090 and in the evening as we headed back to Godbout we found Crinkle again, but now paired with B169 Blanco, a well known male, and positioned about mid channel. 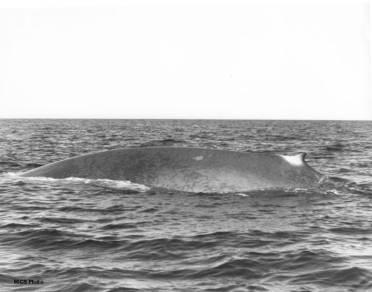 The day had been a good one all around, meeting new friends, calm weather and the whales had revealed more about their lives in the St Lawrence. The exploration and discovery of this new area, which seemed to be regularly visited by blue whales, had been of great value.From June to November 93 individual humpbacks were identified, and this number should hold for the 2002 season, because we have but a few very poor images left, which should be difficult at best to classify. Of the humpbacks seen in 2002 66 were known individuals and 27 new, and of these 3 were calves. One new individual was found off Gaspé (H573), two in the Mingan/Anticosti sector H574 and H576, however, it is the northeast Gulf that most of the new humpbacks were identified-24. This was amongst the 2-4 poor years for humpback sightings in the Gaspé and Mingan/Anticosti areas- the food must have been more abundant elsewhere.Amongst the 42 known humpbacks seen in the Blanc Sablon was H150 Quartz July 30th, seen August 24th in the Mingan/Anticosti area.

While to the North of Anticosti we found Fleuret H009, Gronier H228, Two female humpbacks did stay for several weeks in the area and often approached our boats to view the strange creatures floating on the surface.

Off Gaspe only five humpbacks were seen- Splish H002, Tracks H109 and Tingley H227 seen July 7th in Gaspé, July 20th in the Mingan/Anticosti area and September 7th seen east off Anticosti Island thanks to Charles Kavanagh who sails regularly in the region and who offered us space aboard his sloop for two team members in order that we could survey further east along Anticosti Island.

Off Matane Rene Roy photographed Tic Tac Toe, who is a juvenile. In fact it has been reported there in the winter months as well. This young whale has been reported regularly in the last 3 years between Tadoussac and Les Escoumins and is a star attraction for the whale-watching boats in that region. One other humpback H531- again a young animal - was seen when we were working on blue whales off Portneuf.

Off Sept-Iles, near the mouth of the Moisie River we found four juveniles, who included Varicelle H529 and H549 Fleuret's H009 female calf in 2001 present off Mingan that summer and an adult Corona H165 photographed by Jacques Gelineau. 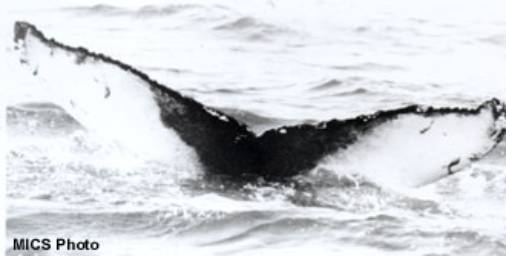 The finbacks were very discrete and solitary the largest number seen in a day was 15 individuals. As with the humpbacks they would appear and quickly disappear to an inaccessible place outside our study area. One day offered us a more usual moment with finbacks, when 2 spouts spotted against Anticosti Island quickly drew our boat to the position where they had disappeared from the surface. Suddenly we were surrounded by eight other surging finbacks exploding to the surface, where there had been no indication of their presence moments before. We were engulfed within this group of giants, while the two originally sighted surfaced some distance away.

Because this species much more subtle pigmentation pattern it always takes more time to match and so the 2002 is not quite complete. We can say, however, that at least 30 different fin whales were identified in the Mingan/Anticosti sector, 10 off the eastern tip of the Gaspé Peninsula, and 8 off of Sept-Iles. Amongst these was F087 seen both off the Mingan Islands and Sept-Iles and F002, F028, F099 et F320 seen only in the Mingan/Anticosti area.

It is likely that finbacks like humpbacks and blues, travel regularly between the Sept-Iles and Anticosti areas while foraging for food and further afield as we can see with blue whale movements in particular.

A right whale spent about two weeks in the Jacques Cartier passage and provided regular views of this most endangered of the large baleen whales. ID pictures were taken of the head callosities and sent to our colleagues working on this species at the New England Aquarium. In addition and much to everyone's joy, several basking sharks were sighted during this same period, which makes perfect sense since they feed on zoo plankton as do right whales, more specifically copepods. This year was noted for the team's travels here and there in the St Lawrence trying to keep up with the dispersal of rorquals, and by valued collaboration with old and new friends. Special thanks go to the Gelineau family in Gallix, Yvon Belanger of Croisieres du Grand Heron in Forestville, Rene Roy in Matane, the Echos des Mers crew, and the GREMM and Meriscope teams.

And to our donors, session participants, and volunteers, without whom the research would not get done and station would sit silent, very special appreciation is offered.