The field season that almost wasn’t. 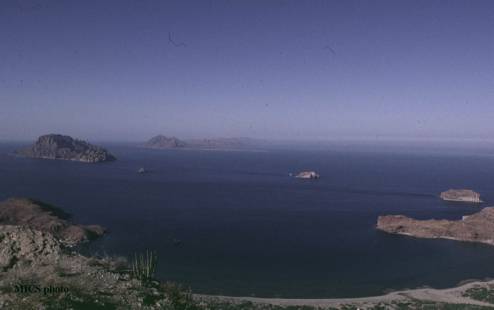 Permits are simple, yet complicated, because they can allow or prevent you from doing something, or in the hands of too many government offices the process can become a long drawn out frustrating event, which at times has no clear result. In 2002 the process began in May and finished when we actually got the permit in hand the last week we were in Mexico. The permit to carry out research had been approved by February 22, which explains why we were all in a standby mode so late prior to the beginning of our field period in Loreto. We would like to apologize to all those who waited with us for the permit two-step performance to end. In the end it all worked out and we were able to do some fieldwork and include 11 session participants in our work, and we thank you for your patience.

Though we did have a certain number of blues, at least 25, though the analysis has not been completed, we did not have the numbers we had in 2001. Last year we had 4 session participants and over 100 blue whale sightings, while we had 11 sessions this year. I always find it interesting that in years with many blue whales we have few sessions, while in average to poor years we have the most participants. There is something to investigate there; however, we have yet to formulate a testable hypothesis.

Even though Christian and Oscar were in Loreto by the first days of March weather them from getting out, and it seems as though the peak blue whale prese3nce was from late February to March 10 this year. Fernado Arcas was able to take some pictures useful for Ids in February and on one day during the first week of March, which yielded 7 known and 8 new blue whales. We can be certain of at least 10 other animals photographed and probably more. We did not see Nubbin this year, though there was a very similar animal, however, B009 a female known since 1984 and seen last year as well, was present on two days. In addition, we had some very enjoyable moments with White-eyes (B198) known since 1990 and also seen last year. White-eyes is a very easy going whale and often slows to a near stop near the boat and is one of the few blue whales that logs at the surface, much like a sperm whale. Though we do not yet know its sex, we do have sloughed skin samples and hope to have an answer in the next few months. It is a large animal and a fluker with very distinctive white markings on the ventral surface of the flukes-rare in blue whales.

By mid March there were few blue whales in the Loreto area, though a few stragglers were observed into April. We did have some encounters with 45ft male sperm whales between Carmen and Loreto. One evening as we headed home to Loreto after a good day’s work on calm seas, we found two sperm whales logging about 7 miles south of Loreto. So shut off our engine and drifted within 200m of the pair and watched. To our surprise they drifted slowly towards us and one came within inches of our boat, raised its head to have a look, dove briefly and re-surface with its companion just astern. We stayed put and enjoyed the view. Single or pairs of male sperm whales were seen on several days in early March, seemingly heading North. 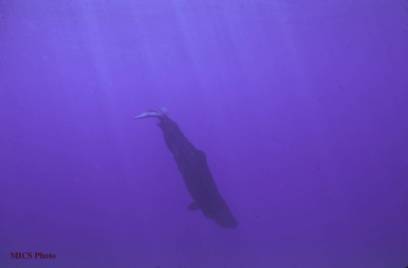 We did observe 2 perhaps 3 small humpbacks and the usual 10-20 fin whales and groups of common and bottlenose dolphins throughout our stay.

The water temperature to the North of Coronado was of 17ºC throughout March, while to the South of Carmen it was generally around 20ºC, with a high of 23ºC at the beach on the northern end of Monserate. A day of few blue whales and so a beach landing was in order.

Later in the summer we will have more complete details on the blue whales seen in 2002 in the Loreto Marine Park. Thank you very much to our session participants for their support of our work in 2002 and for your patience with the permit process.