The 1st of June, a large part of the team has already gathered on the bridge of the Mingan Islands research station, ready to undertake 5 months of work in the field. Ready as well, to clean, renovate and innovate!

Each year is a challenge, with little financial support and much to do: census the animals in the field and maintain the boats, the research station with its interpretative centre and the house in which the team members live. 2002 was a cold, windy and rainy June, leaving the team on shore with many days to facilitate numerous renovations. Here are a few candid shots: 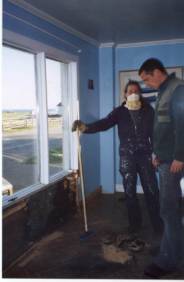 The forgotten ones of the MICS tower: Aude and Clothilde! 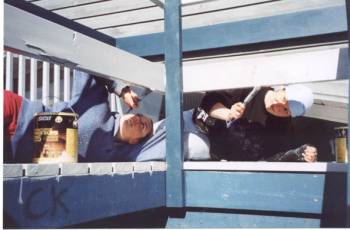 And Alain,
who spruces up
the boats every Junebefore putting them
back in the water! 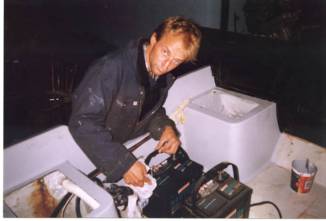 Once the Museum was set to rights, the boats gleaming and the house rejuvenated, we were finally granted some beautiful weather, allowing us, at last, to get on the water and see what we could find. The first day out on the water we observed a blue whale: B084, known since 1988 and seen last year in the Mingan/ Anticosti region.

Unfortunately, during the following week, she was the only whale to make an appearance! There were hundreds of harp seals, large numbers of porpoises and hungry minke whales in the archipelago that granted us some impressive scenes of surface feeding but the offshore waters were depressingly empty!

In Havre Saint-Pierre, a finback and a humpback whale came to feed between the islands and then disappeared!

The first finback whales were finally seen near the end of June, beginning of July, as was a juvenile humpback who ventured into the archipelago. 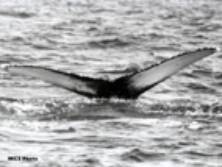 At Mingan, July started off with fog and assortment of rain and wind, but bit by bit the offshore waters were beginning to fill. A second blue whale was seen; B277 Stag (a new whale since 2001) and a third: Trauma B349. 15 finbacks were also seen and finally a few humpback whales such as H531 Le Souffleur, who was biopsied and a juvenile who was milling around in 8 metres of water, very close to the coast!

To the excitement of everyone at the station, a right whale (Eubalaena glacialis) appeared and stayed for more than 10 days in the Jacques Cartier Passage and the rare whitebeaked dolphin was seen working the waters outside the islands.

To sum up July, it would suffice to say that we may not of had quantity but we had quality!!!! Certain visitors were able to see all of these species in one day! July is an especially memorable month as it is exceptionally rare to see a right whale in the Anticosti/Mingan sector!

Fluke of a Right Whale: 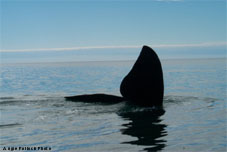 On two separate occasions, two team members embarked on l'Echos des mers to census the animals of Strait of Belle Isle and Blanc Sablon. Both of the expeditions were a success. The first trip allowed the survey of more than 20 humpback whales such as Pincers H186, who has been seen regularly in the Blanc Sablon sector, but also Troll H344, Linaeus H115, Mamba H358, Geyser H182 and Violon H188.
The second expedition was an impressive one as more than 150 humpback whales were counted and 50 of them were photo-identified. The photos are not all developed at present but Troll H344 was still there the second time around as was H115 Linaeus.

The data analysis is not yet finished, but results will be posted when the analyses are complete.

In conclusion, we wish to thank everyone who helped in some manner to make this year’s field season a success.

In Gaspésie, thanks to Parks Canada, which has helped us each year to complete our Gaspé research and provide us with excellent working conditions. A special thank you as well to Fanny Gagnon for her hospitality, her availability, her generosity and her beautiful smile. Thank you to the Bay of Gaspé cruises for their cooperation and particularly to Guy, Captain of the Narval III for his knowledge and help.

Thank you to the Gélineau family of Galix, who are always there to lend us a hand and the OPS Kayak team from Longue-Pointe de Mingan for their technical support in times of crisis. Thank you, finally, to the team of l'Échos des Mers for their valuable collaboration and to Charles Kavanagh for his mechanical expertise and observations.

And of course our warmest appreciation is
offered to all donors, visitors, sessions and
volunteers who make our field seasons a success.