Chameau B103 is in the estuary!

Chameau (B103) is a blue whale which was first observed in 1991 in the estuary. In 1994 we were able to identify Chameau as a female thanks to the small piece of skin obtained from a biopsy which allows us to sex the individuals.

This animal is easily recognizable by the particular shape of her back that gives her the appearance of a camel or a sea serpent. This form seems to be because of a deformity of type lordosis (hollow back). 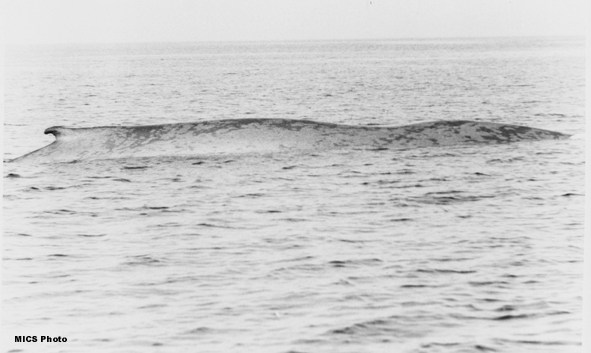 The majority of the time, Chameau has been frequently observed feeding alone in the St Lawrence Estuary and has been seen every year since 1991 except in 1997. In 2000, Chameau was photo identified off the Gaspé peninsula in July and in the Estuary in August and September. In 2001, Chameau was seen once again in the estuary. The fact that this blue whale has most often been observed alone is no surprise since blue whales are mostly sighted alone or in pairs.

This year, on the 10th of August, Yvon Bélanger from Croisieres Grand Heron reported that Chameau was seen in the Estuary with a baby (a calf)! This was great news for a well-known animal and for the blue whales in eastern Canadian waters. In 24 years of field research, only 12 cow and calf pairs have been seen in the St-Lawrence. In 2001 it was the blue whale B208 that was observed with a calf by the GREMM team in the Estuary.

Why so few calves? Most female blue whales may choose not to come into the St-Lawrence when they have calve, with the 12 observed being exceptions. Could there be a problem with eastern Canadian blue whale reproduction and if so what is the cause? Is the recent trend of successive calf sightings on the contrary an encouraging sign? Still only 12 calves in 24 seasons of fieldwork on blue whales is not much when compared to humpbacks and fin whales here in the St Lawrence.

Despite all of the years of research and data collection, we know very little about blue whale reproduction and mortality in the St Lawrence. We will, however, endeavor to pursue our studies and hopefully reveal more on their lives and promising new insights into this population.