Sightings of blue whale (Balaenoptera musculus ) females and calves, in the Sea of Cortez from 1984-2001 and subsequent observations off California.

Abstract
A photo-identification catalogue of 268 individual blue whales (Balaenoptera musculus) was compiled from 1984 to 2001 in the Sea of Cortez, of which 50 were determined to be females either through molecular analysis of sloughed skin samples or because they were accompanied by a calf. A total of 50 calves, estimated at between 10-13m in length, was observed, which suggests that they were one to three months old. Three of these calves were seen again in the Sea of Cortez and photographed in subsequent years indicating some site fidelity. Five other calves first observed in the Sea of Cortez, but not re-sighted there, were later observed off California - one just four months after its initial March sighting off Loreto. Although very little is known about calving in blue whales, a minimum calving interval of two years is generally accepted, with gestation taking 10 to 11 months and nursing lasting approximately 7 months. In this study twelve females were observed with a second calf, with calving intervals ranging from 2 to 11 years. Matching of photographs revealed that a significant proportion of the known females (50) observed in the Sea of Cortez had been photo-identified off California (22). Twenty-one of the 22 females seen off California were known to have had calves. The high sighting rate of females and calves in the area, as well as the repetition of sightings suggests that the Sea of Cortez is regularly used as a nursery for blue whales. The relative high number of calves in the catalogue (16.8%) could be indicative of a recovering population with high recruitment rate, or that a higher proportion of reproducing animals move into the Sea of Cortez during winter months. A crude birth rate from the Sea of Cortez sightings ranges between 0 and 0.167 with an average of 0.107. Introduction This study is based on 268 blues whales individually photo-identified in the Loreto region of the Sea of Cortez in February and March from 1984 to 2001. The females and calves identified were matched to the California catalogue by Cascadia Research, which curates a photo-identification catalog of 1272 individuals collected from 1986 to 2000.

Designation of a cow/calf blue whale pair was made when a 10-13m animal accompanied a distinctively larger adult travelling and diving synchronously within a body length of each other. Females were identified due to the presence of a calf and through DNA analysis of sloughed skin samples. 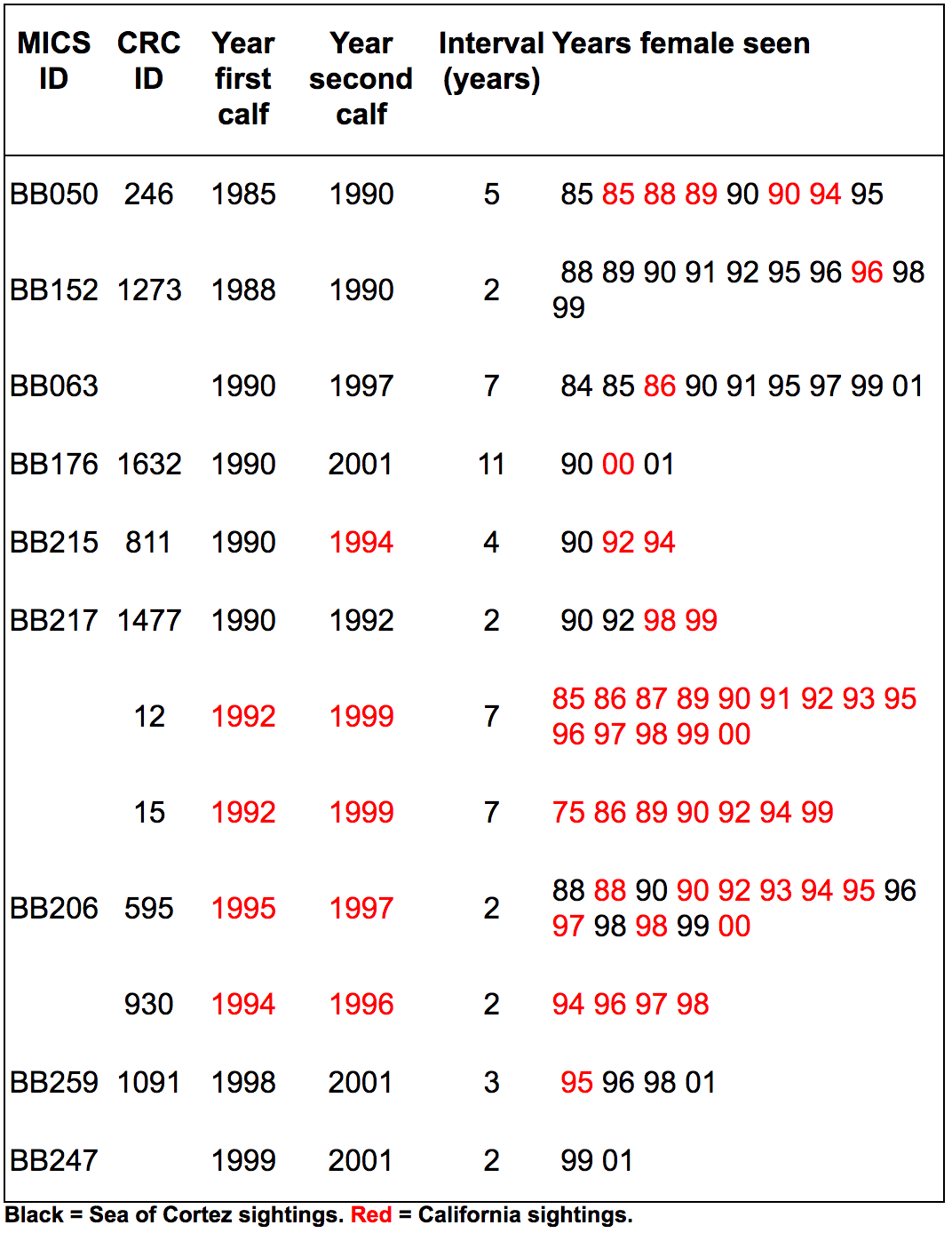 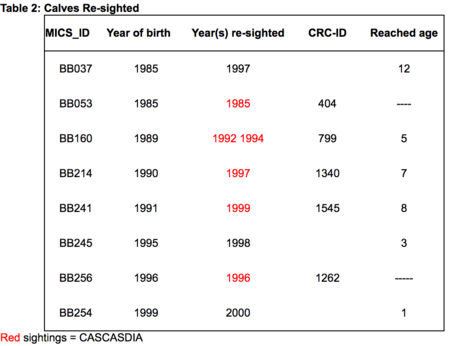 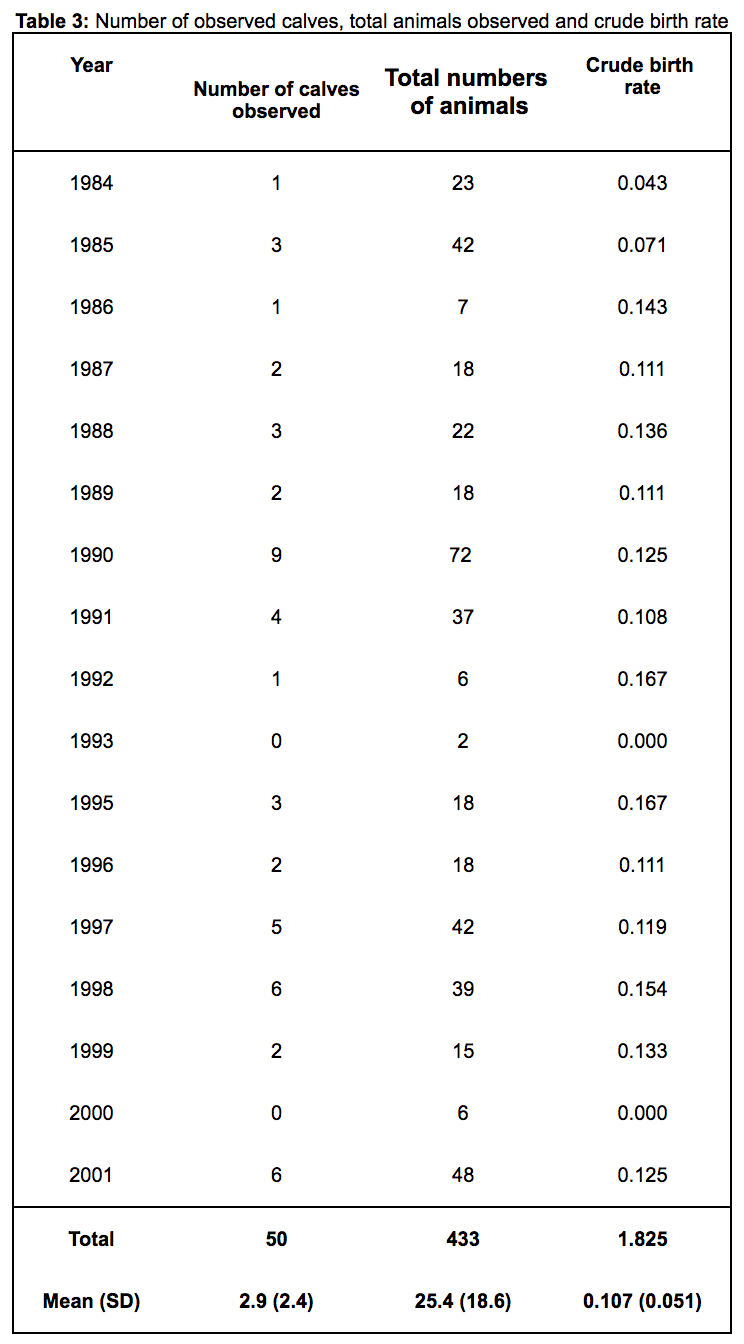 Discussion:
The high number of blue whale cow and calves pairs observed combined with the female-weighted sex ratio from DNA analysis of 16 skin samples - though small - suggests that females occur more regularly than males during winter and spring in the Sea of Cortez. In addition, the high crude birth of 11% found for the Sea of Cortez, which matches up well with the 4% maximum growth rate calculated for blue whale populations by Barlow et al. 1995, indicates that the Sea of Cortez is an important nursing ground for the Northeast Pacific blue whale stock. The five 2yr calving intervals of the 12 calving intervals found, suggests a pregnancy rate of 0.5, which is equivalent to the maximum pregnancy rates of 0.46 and 0.51 calculated for Southern Hemisphere blue whales by (Mizroch 1981). The 2yr calving intervals found in our study, support the belief that sexually mature female blue whales give birth in alternate years (Lockyear, 1984). Calving intervals of 2.35 (SD=0.70) have been described for humpback whales (Megaptera novaeangliae) (Clapham and Mayo, 1990), while a 3 year reproductive cycle has been reported for right whales (Eubalaena australis) (Payne 1984), and (E. glacialis) (Hamilton & Mayo, 1990).

Sexual maturity in blue whales has been described as being 5-10 years, (Yochem and Leatherwood, 1985). Our data includes the first example of three blue whale generations, where an individual first seen as a calf in the Sea of Cortez, returned 12 yrs later with its own calf, having reached sexual maturity at least by age 11.

The fact that only 5 of the Sea of Cortez calves were seen subsequently off California could be due to juvenile mortality, or segregation of immature animals from adults in feeding areas.

Off California from 1992 to 2000, calves accounted for 2.0% (74 of 3,637) of blue whales approached for photographic identification (where presence of calves was noted). The proportion of calves varied by month increasing from May through July (peaking at 3.5%) and then decreasing to 1.4% in September and October and to 0% by November. The increasing proportion of calves from May through July indicates mothers with calves appear to be arriving on the California feeding grounds slightly later than other whales. The decreasing occurrence after July appears to be the result of weaned calves no longer being distinguishable as calves. Even during June and July it was difficult to determine presence of calves. For 12 out of 46 mothers with calves identified off California, one or both was seen separate from each other in a different sighting. The potential later arrival of mothers with calves and the occurrence of weaning during their period in these waters would result in calf proportions being underestimated off California.

Warm thanks are proffered to Thomas Doniol-Valcroze for valuable suggestions and technical support, to Cecile Albert, Oscar Guzon, Martine Bérubé, and Fernando Arcas for their field assistance, to Bill and Betty Riffe for their hospitality and to all those who have contributed photographs to the catalogue

Research area in the Sea of Cortez: 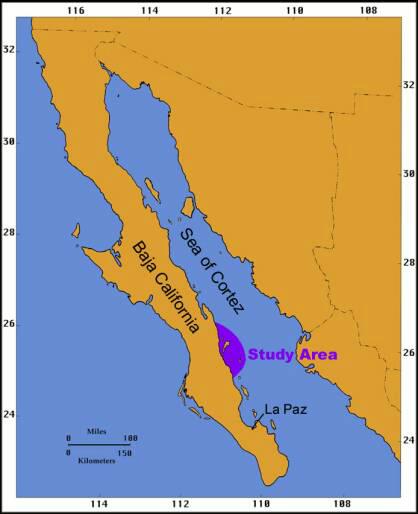 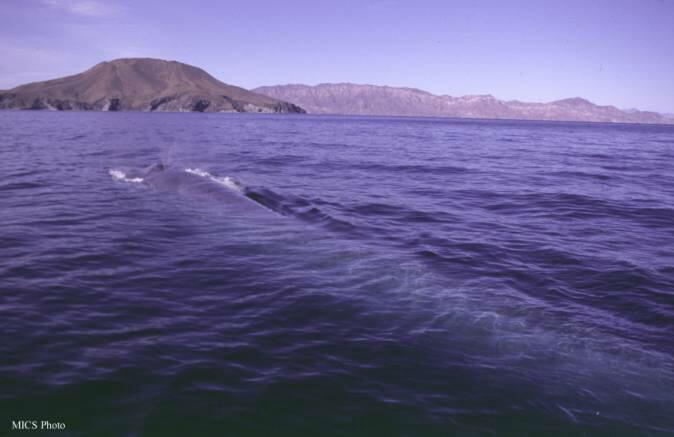