Doctoral candidate in Acoustics at the Pennsylvania State University
and Associate Scientist with the Mingan Island Cetacean Study.

For the past four years I have been recording blue whale vocalizations in four regions of the St. Lawrence where blue whales are typically found: Gaspe, Sept-Iles, Mingan/Anticosti, and the estuary region from Escoumins to Forestville. This work has two main objectives: to catalogue the sounds that blue whales make in the St. Lawrence, and to correlate this catalogue with data collected from photo-identification, biopsy, and behavioral observations. As a scientist with MICS, I feel that our well-studied population of blue whales offers a good opportunity to determine if any correlations exist.

The fieldwork for this project consisted of positioning an inflatable boat close to one or more blue whales, turning off the motor and deploying a single omni-directional hydrophone. The signals detected by the hydrophone were amplified and filtered through an electronic system that I built into the cable, then recorded onto a Sony DAT (Digital Audio Tape) recorder. Movement of the hydrophone was minimized through the use of a surface isolation buoy. During the recording session, I noted the positions of all the whales within sight (identifying those close enough to recognize through binoculars), their behaviors, including interactions, groupings, movements, and surface and dive times. All observations were time synchronized with the recorder. Sessions usually lasted until the whales moved out of range, weather or sea conditions deteriorated, or the close approach of a cargo ship. Between recording sessions we photo-identified blue whales, which allowed me to confirm the identity of whales recognized during the recording session, and others.

Inflatable boat with omni-directional hydrophone underneath and surface isolation buoy 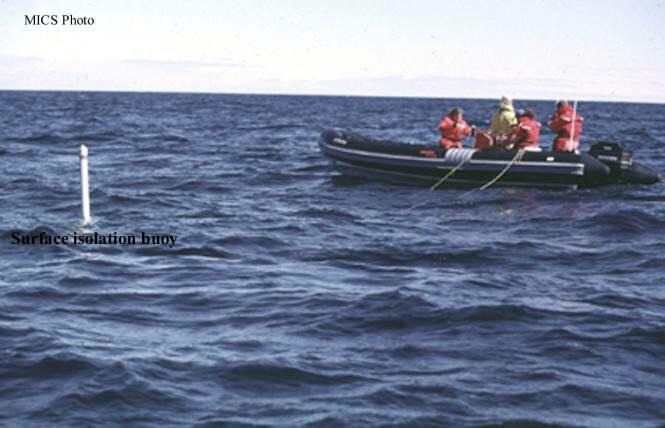 Because I used a very simple recording system, it will not be possible to determine which whale was making which sound. Due to this uncertainty, my analysis will focus on correlations between the vocalizations and more general factors such as density of whales in an area, percentage of males versus females, group size, behaviors such as feeding or traveling, time of day, time of year, etc. Also, it may be possible to determine if man-made noise - such as that caused by shipping traffic - has any effect on the vocalizations of blue whales.

Blue whales produce calls below the range of human hearing, known as infrasonic calls, as well as calls audible to humans. Typically, the infrasonic calls range from 10-20 Hertz, are long in duration (10-20 seconds) and are fairly monotonic in frequency content. The audible calls can range from 30-150 Hertz, are shorter in duration (1-4 seconds) and have a wider range of frequencies in each call. Due to the physics of underwater sound propagation, lower frequencies travel longer distances than higher frequencies, and more monotonic sounds remain less distorted over long distances. It is for this reason that scientists think the blue whale infrasonic call is used to communicate over extremely long distances in the open ocean. The audible calls are heard more frequently in coastal waters during the feeding season and are most likely used for short distance communication. Preliminary analysis of my work shows that the audible calls are quite common in the St. Lawrence.

This project began in 1998, with the majority of the data collected in the 2000 and 2001 field seasons. The field seasons were from early August to early November, with some work done in early July. My research effort was centered mostly in the St Lawrence Estuary between Forestville and Escoumins. In 2000 54 individual blue whales were seen in the Estuary and 71 in 2001. Over 80 hours of recordings were made throughout these two seasons. A preliminary look at my field notes suggests that at least 150 audible calls were recorded, but the tapes still have to be analyzed for audible calls too faint to be heard in the field, as well as for infrasonic calls. Most recording sessions were made during daylight hours, although a few sessions occurred after dark. The recordings were made around all combinations of males and females, singles and groups. They were made around many types of behaviors: surface feeding, traveling, and just milling about (possibly feeding just beneath the surface). Many whales passed within 100m of the hydrophone - some passing right underneath us. In addition to the actual whale vocalizations, the background noise on the recordings will be used to compare ambient noise levels between the different regions of the St. Lawrence where blue whales are normally found.

This project has shown that blue whales do vocalize in the St. Lawrence, and hopefully my analysis will shed some light on when, where and why they do. In the future, I hope to work with arrays of hydrophones throughout the St. Lawrence. We then could study their vocalizations 24 hours a day, year-round, in all weather conditions. We could trace their movements, and compare vocalizations, between the various regions within the St. Lawrence. With the arrays, it also will be possible to pinpoint individual whales. This will let us determine if there is a difference between the calls of males and females - or if females vocalize at all. My long-term goal is to be able to identify individual blue whales by their vocalizations - which, if possible, will open a new chapter in our study of the St. Lawrence Blues.