Are female blue whales more present in the Sea of Cortez than males in winter?

We know the sex of 53 out of the 264 blue whales identified for the Sea Of Cortez. There are 49 females and 4 males. Because we have not taken biopsies skin samples as we do in the St Lawrence and have only had a few sloughed skin samples analyzed to this point, the above ratio can't be used for definite conclusions. The sex of most females was determined because a calf accompanied them. Out of 16 sloughed skin samples analyzed this far, however, 12 were females, which is striking. O f the 14 most frequently sighted blue whales (4 years or more) at least 7 are females and 1 a male, the sex of the remaining 6 is not known.

We have had only observed 3 blue whales first seen as calves off Loreto in subsequent years. This may be largely due to the fact that blue whales do not reach sexual maturity until 10yrs of age or more and may stay away from wintering areas until they are sexually mature. We did, however, see a yearling in 2000 off Loreto, which may have been an exception. To be certain we need a larger sample of re-sightings of known calves.

The most interesting long-term match of this sort was of BB037, first seen as a calf in 1985, and sighted again in 1997 with its own calf. The work off Loreto has helped us confirm two-year calving intervals, that this region is used by blue whales as a nursery, and now we have 3 generations of blue whales with ties to the Loreto area. This returning female with her own calf further reinforces our feeling that this region is important to blue whales during the breeding season. We still do not know where they calve, however, but with further study we should be able to determine this more clearly. 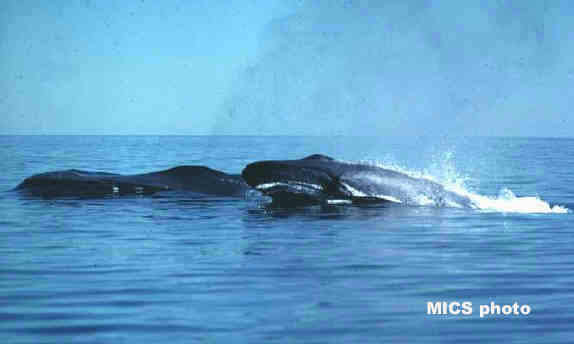