Abstracts of papers presented at this year\'s Biennial Marine Mammal Conference in Vancouver, BC in November

A photo-identification catalogue of 255 individual blue whales (Balaenoptera musculus) was compiled from 1984 to 2001 in the Sea of Cortez, of which 45 were determined to be females either through molecular analysis of sloughed skin samples or because they were accompanied by a calf. A total of 42 calves, estimated at between 35-45ft in length, was observed, which suggests that they were one to three months old. Four of these calves were seen again in the Sea of Cortez and photographed in subsequent years indicating some site fidelity. Two other calves first observed in the Sea of Cortez, but not re-sighted there, were later observed off California - one just four months after its initial March sighting off Loreto.
Although very little is known about calving in blue whales, a minimum calving interval of two years is generally accepted, with gestation taking 10 to 11 months and nursing lasting approximately 7 months. In this study four females were observed with a second calf, with calving intervals ranging from 2 to 7 years.
Matching of photographs revealed that a significant proportion of the known females (28) observed in the Sea of Cortez had been photo-identified off California (11). Nine of the 11 seen off California were known to have had calves.
The high sighting rate of females and calves in the area, as well as the repetition of sightings suggests that the Sea of Cortez is regularly used as a nursery for blue whales. The relative high number of calves observed (16.1%) could be indicative of a recovering population with high recruitment rate, or that a higher proportion of reproducing animals move into the Sea of Cortez during winter months. A crude birth rate from the Sea of Cortez sightings ranges between 0,063 and 0,167 with an average of 0,1. 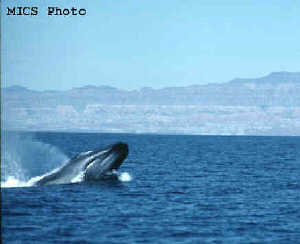 The spatial distribution of four species of rorqual whales was studied along the north shore of the Gulf of St. Lawrence during the months of June to October from 1989 to 2000. A research effort of 6511 hours at sea yielded 849 sightings of blue whales (Balaenoptera musculus), 5291 of finback whales (B. physalus), 3822 of humpback whales (Megaptera novaeangliae) and 6489 of minke whales (B. acutorostrata). Spatial and behavioural data were collected at sea using rigid-hulled inflatable boats, and GPS were used to obtain accurate positions. These data were plotted and analysed using GIS software to test the hypotheses that patterns of distribution were not random, were associated with bathymetry and reflected specific differences in habitat use. The resulting maps illustrated the clustered distribution or rorqual whales linked to sea-bottom topography, probably associated with areas of local upwelling, increased productivity and concentration of prey. Blue and fin whales shared almost the same distribution, humpback whales were found in slightly deeper, offshore waters whereas minke whales were more abundant in shallower waters. Little attention had been given until now to local patterns of distribution in the area and such information can therefore be potentially useful for practical management considerations. The results also emphasised the importance of scale in ecological studies of marine mammals and the need for further research using additional oceanographic parameters to understand habitat selection.

We report on an anomalously pigmented white blue whale that was seen 15 times on 9 days over a 4-year period. Albinism or pseudo-albinism is uncommon but does occur widely in land mammals as well as marine mammals. Anomalously white individuals have been described for 20 species of cetaceans including the closely related fin whale (Balaenoptera physalus) and sei whale (B. borealis), but this is the first record of a nearly all white blue whale (B. musculus). Fourteen sightings made over 8 days by Cascadia Research personnel occurred in Southern California in 1999 and 2000 and appear to be the same whale seen by Mingan Island Cetacean Study in the Sea of Cortez, Mexico in 1997. This animal, while distinctive, could not be identified using pigmentation patterns typically diagnostic in blue whale photographic identification due to its white coloration. Re-identification of this whale had to be based on scars and dorsal fin shape. Position, depth, and behavioral data were recorded for all sightings and a biopsy sample (still being analyzed) was obtained during one sighting in 1999. Ten of the fifteen sightings were from 1999 and occurred within a ten-mile radius over seven days in the Santa Barbara Channel, California. Four sightings from three days were made over a 28-day period in the summer of 2000, also off southern California. Though albinism and pseudo-albinism has been widely described in the literature, and often captures public interest, the scientific significance to cetacean research may be limited.