It is late May and the Mingan field station comes to life after a long winter enveloped even partially embedded by snow. The windows are open to the still crisp air and life returns after the building’s hibernation. The office comes to life with the first team members and interns, the garage door opens and one by one the boats emerge into light for their spring revisions and are made ready for another 5-month season of plying the St. Lawrence.

This year the station and museum welcomed its first visitors on June 12. That first day on the water was eventful, with sightings of harp seals, minke, fin, humpback and blue whales. This auspicious and energizing beginning after days and days of preparations set the tone for a good season. What followed, however, proved to be more difficult. Late June and most of July proved to be one of the worst months ever, it was cold, gray. Windy, and wet paralyzing our fieldwork off Gaspé, Mingan, and in the Northeast Gulf. Few days on the water yielded few marine mammal observations. Catherine Berchok, who returned to Gaspé to pursue her acoustic work on blue whales from June 27 to July 11 was limited to 20.5 hours on the water. The few hours on the water were in pour sea conditions and the effort only yielded 2 blue whale Ids; B273 and B220, as well as Siam H007, a regularly sighted male humpback whale known since 1981. It was a bit frustrating since we could regularly see many spouts from shore; however, the weather dictates what one can do at sea.

Just the same the few Ids we did get added some interesting information; B273 was seen in the Estuary: August 27th and September 6th, adding to our knowledge of blue whale dispersal in the St. Lawrence.

Siam was seen in the Estuary near LesEscoumins 4 days after he was sighted off Gaspé, then a few weeks later off Mingan then back to the Estuary again. A good example of how tracking individuals through photographs of natural markings teaches us a great deal about how they move around the Gulf. 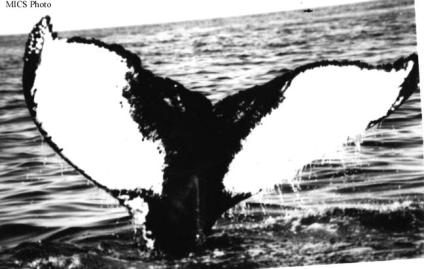 While the Gaspe team waited patiently on the dock for the weather to change, those in Mingan tried to pierce the fog and 2 made ready to embark on the Echos des Mers to seek out whales along the lower North Shore as far as Labrador. When in late July the whole team was re-united in Mingan, the evaluation was similar; the results for the first portion of the season were poor! Few if any outings to sea and little data. Just the same a fin whale known since 1989, F028 was seen off Mingan with a calf. The female was later seen alone, the calf already weaned or dead.

After a difficult beginning of season, the weather improved, moral went up, and the season was productive, September in particular. Eighty-eight blue whales, including 12 new individuals were seen in 2001. Amongst the new animals present it is important to note a calf, the 11th seen in 23 seasons, born to B208. (Sighting:
B208 and calf in estuary in August/ GREMM data;

B208 alone in estuary September 14th/ MICS data) Of the total blue whales sighted, 2 were seen off Gaspé, 9 off Sept-Iles, 11 in the Mingan/Anticosti area, and 71 in the Estuary. Some animals sighted in more than one area include; B273 observed off eastern Gaspé and in the Estuary, B084 off both Mingan and Sept-Iles. B349Trauma, a blue with severe scarring along its back, was first sighted off Mingan( August 8th ), then in the Estuary later in the season( September 24th). This animal has only been seen once before, in 1997 off Sept-Iles.

It is important to note that it had been six years since the number (11) of blues and their residence time had not been as high in the Mingan/Anticosti area.

And our adopted blue whales:

We sighted 52 different humpback whales in 2001, of which 17 were new including 7 calves, however, since the matching work is not quite finished the totals could increase somewhat. As is usually the case many old friends were present: Splish-H002, one our biggest females, known since 1980, Circe H004, a female known since 1982 and accompanied this year by her 4th calf, Freckles-H006, a male known since 1982, was seen regularly throughout the season and gave us some great surface feeding shows, Pseudo-H008 known since 1982, her daughter Fleuret-H009 also of 1982 with her 4th calf-three generations together. 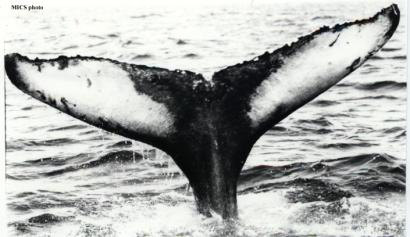 Toro-H012, known since 1982 by our team, but first photographed in 1978 by other researchers off Newfoundland; Brax-H044 also known since 1982 was with her 2nd calf in August 12th, however, August 21th she was alone and the calf was not re-sighted. Was the calf weaned, which would have been early for humpbacks, though certainly possible or did the calf die of natural causes? There is fairly high mortality of first year animals in the wild. Brax, did offer us some spectacular surface-active displays, on one occasion she presented us with 15 minutes of varied behavior, flipper slapping, lob-tailing, tail breaches, and full breaches. On that occasion she was accompanied by Corona-H165 a male observed regularly this season.

An individual known since 1988, when she was a calf, and famous for her curiosity of our boats, Nocturne-H067 was seen a few discrete times. And one occasion it was along Anticosti, near Pointe Nord in the fog while she was surface feeding - a phantom-like observation.

Because the matching work for this species is more difficult, it takes more time and we have not yet formally identified all of the animals photo-identified. However, we have been able to determine that we sighted approximately 50 different individuals in 2001, including F028, F018, known since 1984, F045 known since 1985, and F304 observed in 1998 for the first time and also seen in 2000.

Numerous minke whales were sighted, as is the case each year close along the coast and offshore, everywhere there is food for the taking, minkes will be present. One in particular, attracted our attention, however. Each day in June this minke would feed along and against the docks in Mingan at high tide. It benefits whales to herd or corral prey, in this case capelin, and they will use the surface or physical structures in the water column against which to do so. The minke pinned the capelin school against the dock and scooped up mouthful after mouthful right in front of delighted human spectators on the dock or along the beach. 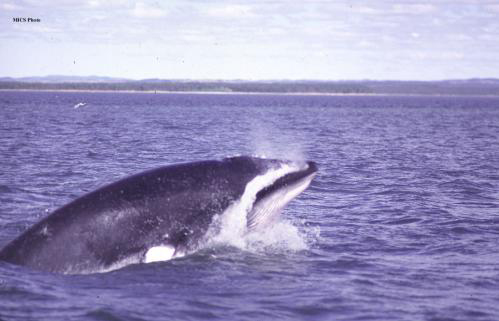 Harbor porpoise were very abundant again this year, often dotting the Jaques Cartier Passage by the thousands and even more forcefully porpoising this year, seemingly imitating behavior more usual to Atlantic white-sided dolphins, who were very rarely sighted in 2001. 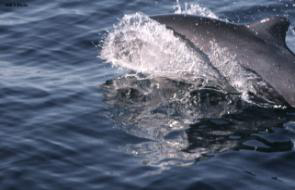 Two right whales, a rare sighting any year, appeared off just North of Anticosti one morning in august and proceeded to offer one of the more interesting and enjoyable observations of the summer. One was a bit smaller than the other and so could have been a calf; the behavior was more akin to that seen in courtship groups. The two whales spun on their axis while spy hopping and repeatedly passed just beneath the boat, followed by a ballet of spins and caresses of each other’s flanks with their broad pectoral flippers. A real pleasure for whales and viewing public alike it seems. 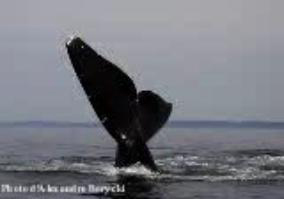 During the season at least 10 basking sharks were sighted in the Jacques Cartier Passage, like submarines at periscope depth, raising their broad, triangular dorsal fins above the surface. It is interesting to note that right whales and basking sharks historically overlap in range, probably because both species feed on zooplankton copepods such as Calanus.
July 12th off Whittle Cap: 2 and July 26th / Belle Isle Strait: a group of 6 individuals

pygmy sperm whale (Kogia breviceps) was found beached just east of Havre St. Pierre, however, due to a governmental two-step and subsequent trip the carcass was lost to us and no analysis was made to determine death. The skeleton would have made a fine display and the tissue could have been analyzed for genetics and toxics. This species has not been observed by us in the 23 seasons we have worked the Gulf waters and in fact no record exists of sightings for the species in the northern Gulf and only very rarely in the Gulf of St Lawrence at all.

As each year since the creation of the field station, we want to thank warmly those who have participated in our work enabling us to pursue our research and education programs. A special thanks to all visitors to our interpretation center; to those who join us for a day of fieldwork, our session participants who share with us more than any others the day to day experiences joys and trials of fieldwork, to the volunteers without whom the station could not operate, and to the generous donors who have given directly to our work or through blue whale adoptions.

We offer particular thanks to the crew of the fishing vessel Grand Makasti who freed a humpback whale from fishing gear it become entangled with north of the Gaspé Peninsula, and which could have caused its death.

Special thanks to Celine and Daniel who send us regular sighting reports from Gaspé Bay from the first sighting in April to the last in January, to Catherine Berchok , who while collecting data for her doctorate in blue whale acoustics has provided us with very detailed and accurate data, as she did when working full time at MICS, to Jacques Gélineau who provides most of the observations from the Sept-Iles area and helps out significantly at the station each summer; to Yvon Belanger/ Croisière du grand héron/ without whose generous hospitality our work in the Estuary would be much more difficult; to the GREMM for all their support, research collaboration, and general good will, the Echos des Mers team and Dany Zbinden for their support and collaboration, and finally to all those who show confidence in us and send us their personal whale pictures.

Your participation is very important and useful to us, because it increases our capacity to track the whales we study in the St.Lawrence