2001, A field season of upbeat Blues in Loreto

Each year as the plane approaches Loreto, anticipation builds and I look down on the Sea of Cortez hoping to catch the glimpse of a blue whale's back or spout as we speed over the water on our final approach. It is as though spotting a blue from the plane before landing will reassure me that our time in Loreto will be filled with blue whale sightings. The months of February and March have certainly been very variable in frequency of wind and blue whales over the years. We never really know what to expect, except that the sun will shine, it will not snow and will invariably be warmer than Montreal at that time of year. Would this be a good year?

On the first morning out, we reacquainted ourselves with the striking wall of mountains rising up behind Loreto, reflecting in the calm morning surface. The sky was clear, as on most days and the sun had just climbed over Carmen Island. There was barely a hint of wind, from no set direction, which indicated it should be a calm day. Would there be blue whales? As we moved southeast we spotted the first tall spout, brightly illuminated and etched against Carmen in the morning light. There were two whales, spouts hanging in the morning stillness, a scintillating wash and they were gone. They were up again within 3 minutes and this time we could see their long dark backs and tall triangular dorsal fins as they dived - finbacks. 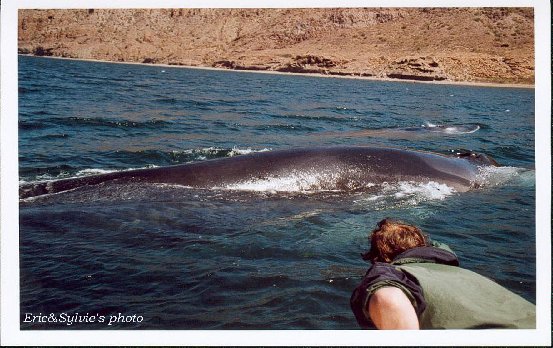 Though we concentrate on blue whales off Loreto, we do take ID pictures of well-marked fin whales when the occasion presents itself. Encouraged that there were whales in the area, we moved south along Carmen in search of blue whales.

Emerging from behind the southern tip of Carmen (Punta Baja), we are met by the familiar shapes of Isla Monserrate to the southeast and the Baja California coast curving slowly south to Punta Marcial some 23 miles away. The air is still except for the distant sound of an outboard motor and the sun bears down on us as we look and listen for whales. The distant muffled retort of a whale's breath reaches us from the Northeast. A quick scan with the binoculars, the sound of a second spout, and we catch the telltale remains of a tall plume of vapor. 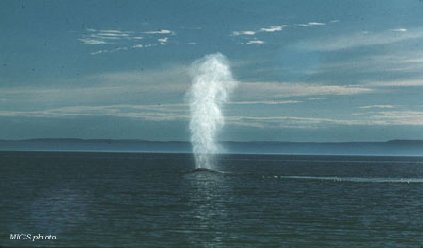 Several more breaths and the whale dives, revealing a pale back, followed by flukes raised high above the surface - a blue! 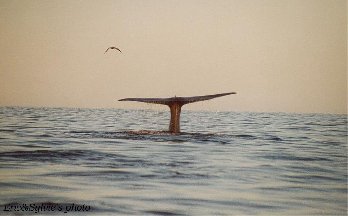 For ten minutes we steer the boat to where we feel the whale has gone down and wait. Two more minutes and a blue breaks explosively through the surface mirror. While the blue whale breathes we approach along its right side and photograph its flank in order to identify the individual. The whale seems very familiar and when it dives we see that it is BB005 named "Riffe", known since 1982 and a regular visitor to the Loreto area in February and March. As the whale disappears we notice three more tall spouts just a bit east of us and move in that direction.

The 2001 field season in the Sea of Cortez started auspiciously and in the end was one of the best blue whale years, since our first season there in 1983. Sightings off Loreto and by other researchers working further south off La Paz revealed that there were at least 100 blues in the region in late February/early March. We photo-identified 48 blue whales in the Loreto area, 32 known and 16 new, including 6 calves. Prior to 1999 we always found more new blue whales than known during our study period, however during the last 3 years there has been a noticeable shift where the sightings have been weighted to more known animals sighted. Even though there are still many we have not catalogued and calves added to the population regularly, we may be getting closer to knowing most blue whales that visit the Sea of Cortez in winter and spring. Such findings reveal the benefits of long term studies, particularly on long-lived species.

The most hoped for sighting, however, was that of Nubbin (BB045) known to many of you. This whale has been seen by us since 1984 off Loreto and was first photographed in 1970 off of California. Nubbin remains the oldest known blue whale on the planet, though we have no way of knowing how old it was in 1970. This year Nubbin was sighted near Coronado Island on several days in early March.

As is often the case certain blues were seen throughout the month of March and this included: BB038, BB169, and Paint BB168. In fact 169 and 168 were seen as early as late January to the North of Cornado Island, indicating that though there is a peak in sightings from late February to late March, blue whales can be found in the Loreto Marine Park from December on to April.

Finback whales seen throughout the study period including at least 3 cow and calf pairs. We sighted a fin whale seen since 1985 off Loreto, which has had its dorsal partially amputated - see photograph. In addition there were a few sightings of Bryde's whale including two cow/calf pairs.

Bryde's whale beneath the surface 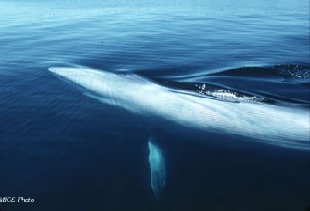 A small pod of 6 orcas were sighted heading north along Danzante during the third week of March and there were regular sightings of bottlenose dolphins, but relatively few of common dolphins.
One sperm whale was spotted from Isla Galeras and though we tried to find it at sea we were only able to hear the sperm whale over our hydrophones and record some of its calls.

Each year we try to get south of the Loreto study area to the north end of Isla San Jose in order to find blue whales that might not make it further north. This year we chose a day during the final week of our stay in Loreto. We got going early, loaded up with more gas than usual and headed south with Fernando Arcas in his panga (boat) Rebelde. The day was calm, but there is always the fear that a Norte will come and make the ride home from the south difficult and mostly painful. On this day the winds held off and we got to within 7 miles of Isla San Jose. We were able approach and ID 8 different blue whales, strung out from Punta Marcial to San Jose including a cow and calf. The blue whales were not as abundant as we had hoped, however, it was a fine day and we added some valuable data we would have missed otherwise. On our way back the sun set when we arrived off Punta Marcial, in fact just as we were photo-identifying the 8th blue whale that day. We had 35 miles to go, the sky was warm shades of yellow, orange and red and we settled in for a calm ride home in the dusk and dark. By the time we got to the level of "White Rock", darkness had caught us, and the sea came to life. There may have been little light in the sky, but the sea surface was bright with bioluminescence. Large and small schools of fish darted in front and to the side of the boat, illuminating the water further in streaks of pale green. This cavalcade of fish accompanied us all the way home and made for a memorable ride at the end of a fine day.

This was not all! On our last day on the water was warm, sunny, and calm - what more could we ask for. Just as the month had begun, when we came around the southern end of Carmen we spotted a blue whale out by Isla Galeras. When we got to the whale a few minutes later we found that they were two- a cow and calf. 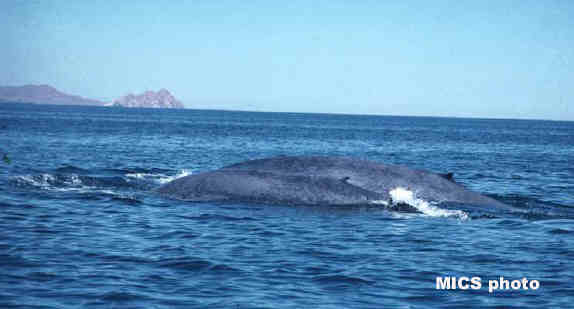 In fact there were 3 cow/calf pairs and 2 single animals in the immediate area. We photographed the first pair and as we approached the second then calf banked away from its mother and came right for us. Calves have done this before, but this one stayed with us for the better part of 3 hours, swimming around and beneath the boat inspecting us thoroughly. It was a wonderful end to a productive field season in the Loreto Marine Park and some of the images from that day are included here. Have a look through the surface at a 35ft/12m blue whale calf. 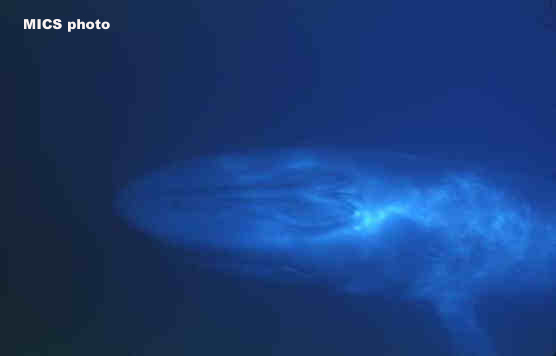