For more than 20 years, familiar humpbacks have come to feed in the St. Lawrence and this summer was no exception with more than 30 well-known individuals. 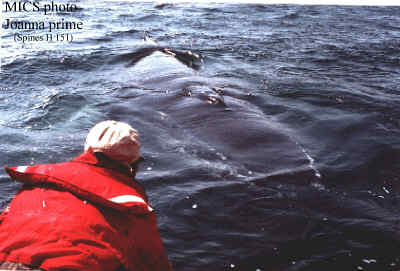 This season was rich, weather was mild and our team was able to work in different areas of the gulf. These expeditions were successful because we were able to observe the movements of several well-known individuals within the St. Lawrence, some of them old timers from 20 years ago.

A few weeks later, all these humpbacks were gathered together in our main study area, near Anticosti and the Mingan islands.

We can easily identify individual humpbacks in the field and this quick identification facilitates our data collection and our studies of populations and behaviors.

And you can certainly observe lots of behaviors when you meet humpbacks!

One individual, Nocturne H067, is known to us since her birth in 1988. Her mother, Ebeny H042, brought her near our boat on that year, and Nocturne has liked to approach and look at us ever since. It is a really curious female who frequently monopolizes our attention, brushes by the boats with her impressive mass without brusqueness, circles us several times, moves away and suddenly she begins spyhopping: her huge head appears out of the water. We can even see her eye! The head then disappears under the water and we can see the whole body through the surface.

This year like every year, Nocturne came towards the boat to pay us a visit; she was with her mother Ebeny, just like they were in 1988. They stayed with us for more than 30 minutes!
Spines H151 is also famous for this kind of behavior: one day in August he stayed 40 minutes around and especially under our boatsÂ

On the other hand, Brax H044 and Tracks H109 have quite a different reputation: they are two grumpy, bad tempered females who regularly breach, trumpet, flipperslap and lobtail!

Calves often show these behaviors but in their case, it’s for fun and play. Last year, we had 5 calves. This year, only Cedille has had one but we have also encountered some juveniles. Juveniles are animals who are at least 2 years old. They are particularly active which is making our fieldwork harder! They lobtail quite often but they seldom fluke correctly so we have a hard time obtaining good pictures for identification; but they sure flipperslap a lot, not to mention rolling and breachingThey look like unruly children and we often can’t identify them or take a biopsy!

In one day - 12 hours on the water - we can sometimes see 20 humpbacks, and hours of behaviors we don’t really understand
Then comes a time when we have to leave the whales and head back to the harbor, but even then we can turn around and look behind us to see the mighty spouts and breaches on the horizon
The day is over for us, but humpbacks carry on and we know we have only witnessed a tiny part of their life!

This is the reason why day after day, from June to October, we roam the St. Lawrence waters to observe as many whales as we can and document as many behaviors as possible.

For all of you that have supported our research this summer by coming with us on the field, here is the list of humpbacks that we have seen during the season: