Michael Fishback, just back from Loreto reports that blue whales are present in the area and he was able to take a few photo-Ids.He reports here on the sighting of an orca attack on a Bryde's whale on the East Side of Carmen Island on February 4.

Travelling north along the East Side of Carmen Island on February 4, I sighted a pod of 18-20 orcas dispersed over several miles. It was 10:05 AM, the water was flat calm on a sunny Baja day and four of us were out to observe cetaceans in a 22ft panga. The orcas were moving rapidly, at times porpoising, to the east. At 10:18 we approached a group of 4 orcas to within 50m, at which point we noticed that a 40-45ft Bryde's whale was in amongst the orca.
The orca harassed the rorqual as it tried to breathe and continued to do so for the next 20 minutes. As the whale weakened it tried to use our boat as a shield from the orcas, actually bumping the boat once. By this time more orcas had joined the first four and the Bryde's whale weakened further from the unrelenting pressure. The large males stayed to the side, leaving the females and immature animals to lead the attack. Soon several individuals launched themselves up on to the whale's back and took bites, rolling their bodies and raising their pectoral fins into the air, as they bit down hard. The large, tall finned mature males eventually joined when the Bryde's whale was near death.

In its final death throes the Bryde's whale flailed it's lacerated body and tail in the air, trailing a faint stream of blood. After 48 minutes of being attacked, shredded, and torn apart the Bryde's whale disappeared beneath the surface. At that point, the only indication that the Bryde's whales was still present was that several orcas surfacedwith pieces of flesh ripped from the carcass in their mouths. The surrounding water was littered with pieces of skin, blubber, and muscle torn from the whale by the orcas.

During the next six and a half hours the orca pod stayed in the immediate area of the kill, diving for 3-5 minutes at a time often returning to the surface with pieces of the Bryde's whale in their mouths. Between feeding dives the orcas displayed a distinct curiosity in our boat and made several close approaches.

MF
The MICS Sea of Cortez field season begins on February 27 and we will have reports from the field describing our observations. 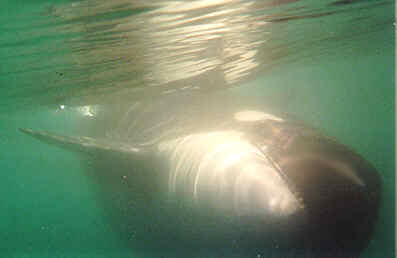 A Sea of Cortez orca coming to ... 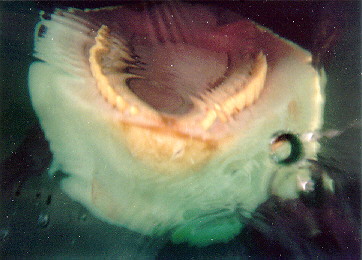