Blues in the Time of COVID

In September during what appeared to be a slight lull in the covid onslaught I decided to head up along the North Shore to the town of Galix near Sept-Iles, where my friend Jacques Gelineau lives, to spend two weeks working on blue whales.  Jack had reported that there were good numbers of blues just offshore in Ste Margerite Bay between Sept-Iles and Port Cartier.  His house is located on a beautiful beach in Galix right on the bay. This is a small village,that had had no cases of covid and provided a good base from which to work.  We took Jacques’ 24ft RIB inflatable- one of MICS’s old Zepplins, which had had a complete refit - by sea to Sept-Iles.  We had been offered a space in the fishing boat harbor there, which is well protected and is not open to the public. On days when the weather kept us ashore Jack fed his multitude of crows, occasionally joined by a raven, perched and waiting at the end of his boardwalk, all manner of leftovers.  It would be interesting to learn how this varied diet might affect them over time.

We had enough days of good weather, which enabled us to work with several groups of blues and during my brief period there we were able to photo-ID 22 blue whales and biopsy 10. The 22 individuals IDed included 5 unknown individuals. We estimate that we saw around 40 individuals during the two-week period.

B119 –an old male- was sighted off Sept-Iles in June and August, B200 was sighted August 16, September 6, and on October 2 off Sept-Iles, as were B550 seen August 29 and October 15, and B470 sighted September 9 and again October 12.  This shows that some blues, if not many, that enter the St Lawrence in summer will stay in the St Lawrence, but disperse to several different areas when foraging.  In fact of the blues sighted off Sept-Iles many seemed to have departed the area, only to be re-sighted within 10-14 days.  Where did they go in between?  They could have gone just a bit further offshore out of our range, or south to the mid Gulf, even the Gaspe coast, or as far East as the Hongedo Pass, to the southwestern end of the Anticosti shelf-edge waters and back.  It is most probable, that they were not that far from the area where we found blue whales in St Margerite Bay off Sept-Iles, and that they foraged just a bit further offshore through several areas well known to them.  Each year is a bit different, as was the case in 2019 when blue whales were concentrated along the Gaspe coast from Grande Vallee to Matane.  In fact we saw many of the same individuals we had seen then off Sep-Iles this past summer/fall.  It shows how mobile blue whales are and how the dynamics of the food chain in the water column change from year to year.

Two of the blues whales seen this year B105 and B470 were individuals that had been seen once off the Azores in recent years, but are regular visitors to the St Lawrence.  In addition two of the blues seen off the southern edge of the Grand Banks during our 2010 survey there, were also sighted off Sept-Iles in 2020.

I would like to Acknowledge Anik Boileau, Benny Caron, Gremm, Christian Ramp for their contributions and of course Rene Roy and Jacques Gelineau who have been long-time contributors to our photo-identification studies, particularly of blue whales.

After 21 field seasons Christian Ramp has left MICS, and has signed on with Department of Fisheries in Mont Joli, Quebec. Christian first came as an intern in 1997 and had been a valued contributor to the stations research operations and coordinating the research at MICS since 2006.  He earned an MSC, which focused on blue whales in 2002 and a PhD on humpback whales from the University of Bremen, Germany in 2008.  He was accepted at St Andrews University, Scotland for post-doctoral work, where he is now a research fellow. During his years at MICS he advanced the research and was lead or co-author on 21 published scientific papers.  Christian was a co-creator of MICSPix, a photographic database that greatly facilitates the matching of all the species we study.

He fostered collaboration with researchers and graduate students from St Andrews University, which lead to important research in our field.   Christian was instrumental to the progression and advancement of marine mammal research at MICS for more than 2 decades and was integral to managing field operations based in Mingan.

Brian Kot will be taking over the duties of research director starting in 2021.  This will be co-directorship until I retire from MICS operations January 1 2023, however, I will be handing the responsibilities for research and general operations to Brian and Valentine Ribadeau Dumas during a transition period until then. Brian earned an M.A. in Ecology and Evolutionary Biology from University of California, Los Angeles (UCLA) in 2005 and a PH.D. in Ecology and Evolutionary Biology from UCLA in 2009.  From 2010-2013 Brian was a Postdoctoral Research Associate at Texas A&M University, then a Post Doctoral Scientist at University of Minnesota/Minnesota Zoo from 2013-2015.  Following these postings and studies he was offered a position as Assistant Professor of Biology and Environmental Science at Antioch College in Ohio from 2015-2020.

Brian has been associated with MICS as an intern since 1998 and in Loreto, Baja, Mexico in 1999.  While doing his graduate studies he came to the station as a team member then as a researcher and mentor to interns and team members, while, carrying out studies on behavioral responses of minke whales (Balaenoptera acutorostrata) to experimental fishing gear in a coastal environment and avoidance responses to experimental fishing gear with add-on devices.  He embraces the opportunity to continue MICS’ studies of rorqual whales-along with the accompanying challenges-and to bring MICS into an ever-productive future through leading edge research of marine mammals. 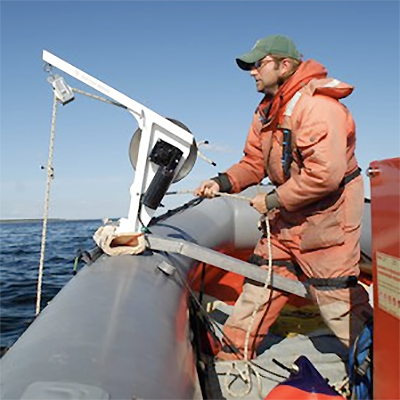