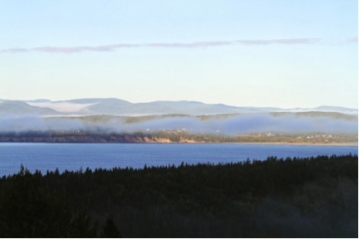 By the end of September into early October, the turbulent weather finally relented and left behind an unruffled stillness, and after weeks of rain, wind, fog, which kept us pinned on land, the sea stayed flat. We had spotted endlessly, hopefully, from the cliffs of Forillon Park's northern coast and only caught glimpses of whale presence. Spouts spumed up out of the water, only to be ghosted away, a drift of fading spray in withering winds, amongst relentless, staggered ridges of white foam. A few blue whales were on this more agitated side of the Gaspe Peninsula, within tantalizing grasp and yet not close enough due rough water.

Gaspe Bay, on the more sheltered southern side of the peninsula, was often calm as a lake, but few whales ventured into its protected waters from late August to mid September. As we got deeper into September, however, the numbers of blue and other whale species increased, and fins, humpbacks and tens of minkes were sighted at the mouth and into Gaspe Bay. As the weather lost its fury and we were able to collect photo-Ids and biopsies of fins and humpbacks in the bay. In the calm of the evenings and into the night the sound of spouts drifted up from close in along the bay's northern shore, while we matched and entered the days' data. 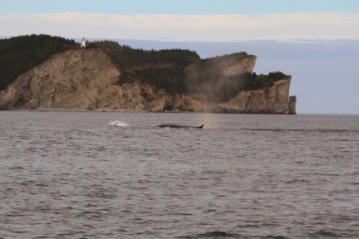 These days of flat seas allowed us to survey out to 10 miles from northern side of the peninsula and we were able to photo-identify, biopsy and satellite tag individual blues that were passing by 5-9 miles off, on their way out of the St Lawrence. Most stayed for a day, then were gone, a few lingered for as many as 3 days feeding along the 100m and 200m contours.

The joint MICS/DFO field effort, lead to the deployment of 11 satellite tags 7 from off Gaspe and 4 in the Estuary. We finally were able to track several whales heading past the Magdalene Islands, through Cabot Strait and along the either rim of the Laurentian Channel, to the shelf edge and even beyond. One blue whale was tracked for 67 days and headed along the southern edge of the Grand Banks to the southeastern corner of the Banks, where its tag stopped transmitting in early December. Interestingly, it traveled along an area we had surveyed aboard the fishing trawler Tripolina in late July 2010. Another blue whale was tracked to a position several hundred miles off the shelf edge where its tag stopped transmitting in late November. All the blues tagged were heading out of the St Lawrence, except for one tagged in early September that headed into the Estuary after having been tagged off Cap Bon Amie-Forillon Park.

Where were the two blues heading that traveled off the shelf edge? One seemed to be on a heading to the mid-Atlantic ridge. Perhaps future tags will gives more information on their dispersal. What we do know is that the satellite track data collected in 2013, and photo-ID matches from St Pierre and Miquelon and Scotian shelf waters this year and in past years, to the St Lawrence, complement each other. Two research tools that are helping us discover more concerning blue whale dispersal and distribution in the western North Atlantic and perhaps the North Atlantic as a whole. 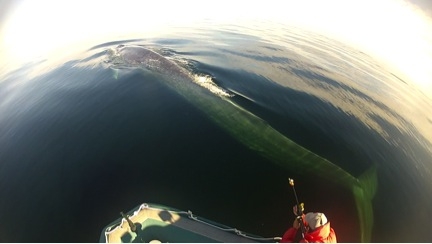 As was the case in 2013, B287-Pheasant was regularly sighted by whale-watching boats at the mouth of Gaspe Bay, in August. During our surveys sightings included, B194-Hippocampe, B189-Bell, B392-Hyperion a Gaspe regular, B036-Pulsar a large male known since the 80s, B334 a blue tagged off Matane in 2010, B166-Mantis a female regularly sighted in the St Lawrence, B271-a female seen frequently off the tip of Gaspe and the mother of two of only 22 calves identified in eastern Canadian waters, B378-Calvin a male-well known from Gaspe to the Estuary, and males B129-Enclume and B168-Puff, both known since the 80s, to name but a few.

After a fine day on the water, 4 tags deployed, there is nothing like the ride home on a calm surface from nine miles out, the sun still a blinding golden ball as it descends to meet the Gaspe Peninsula. We glide in towards Forillon Park, the sun's last blast of bright light leaves the ridge along coast as a dark outline rising up ahead. Four miles from the harbor the sun sets and no longer blinded, we enjoy a much softer light show provided by the last rays of light on the sea around us and in the sky. Clouds' wispy tendrils greedily clutch the sun's setting rays in order to hold onto multi-hued life as long as possible and match the sea's confluence of rich tones. Behind us at the end of our wake the clouds reflect brush strokes of tangerine and ochre that Turner might have painted. Rich water-colored fireworks of rapidly changing hues and shapes, that only nature can offer. 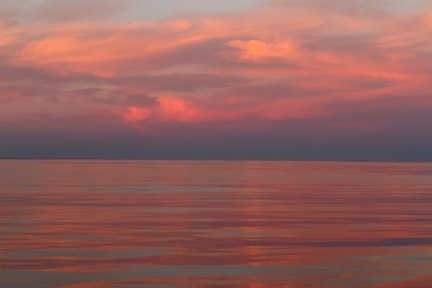 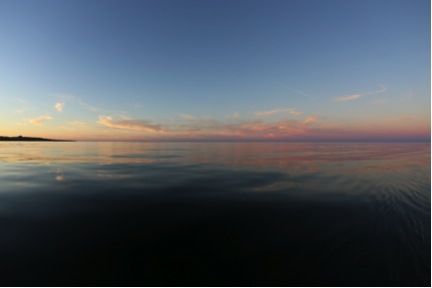 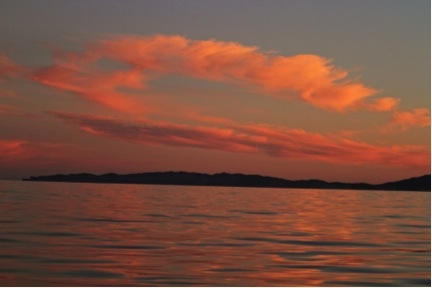 The fleeting color tips to dark violet, then grey and seeps into darkness as we enter the stillness of the harbor-the just faded vivid tones of color still alive in our heads.

Special thanks to our collaborators at Department of Fisheries and Oceans Canada (DFO), to Joel Detcheverry, working from St Pierre and Miquelon, to Mathieu Cote of Parks Canada for his vital support and all those working at the Park entrance gates, who were a great help, to the staff of Croisieres de la Baie de Gaspe, Jean Roy, Marc-Andre Charbonneau, Stacey Cassivi, Guy Synnott, and Laurent Juneau for their invaluable contributions, and of course to Gilles Shaw and Alexa Sicart for their wonderful hospitality and support. 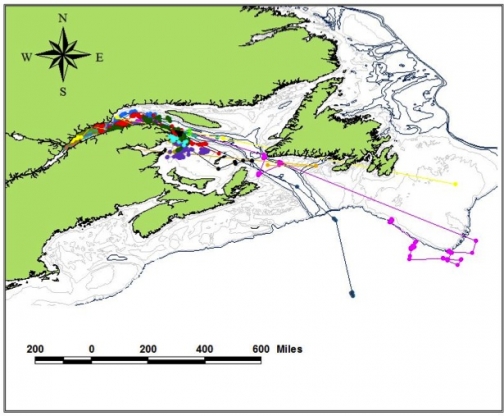 The following is a video of the 2013 whale tagging expidition: