After weeks of few sightings we finally found some whales! On July 8th the weather held up enough for 3 boats to go out to work with the whales. Rafale headed southwest early in the morning, while Mistral and Sirocco headed east to cover as much area as possible. A bit of an overcast, but bright morning gave way to a warm, sunny day with hardly a breeze on the water. Several minkes and grey seals were spotted as we passed through theArchipelago between Grande and Quarry Islands. It was so calm on the water that we could hear the minkes each time they came up for a breath, even though some surfaced further than 500m from the boat.

Moving southeast, we saw quite a few harbor porpoises in small groups of two to five, but still no sights or sounds of the large whales. Though the visibility and audible range was excellent, the first few stops we made to scope yielded only a few minkes surfacing in the area. Finally, as we moved farther southeast and closer to Anticosti Island, large spouts appeared on the horizon. After the first sighting, suddenly there were spouts all along the coast in the distance towards the east. Heading towards the nearest group of spouts we met a pair of fin whales and a pair of humpbacks. One of the humpbacks approached the boat and stayed for several minutes, only inches from the pontoons, spyhopping and maneuvering gracefully around the boat throughout the "eye-to-eye" encounter. The giant white pectoral fins, appearing green beneath the surface of the water, spanned the length of our boat and all the nicks and scratches on his/her back were visible in fine detail. We were even treated to a shower of whale exhalation as he/she surfaced right next to us. 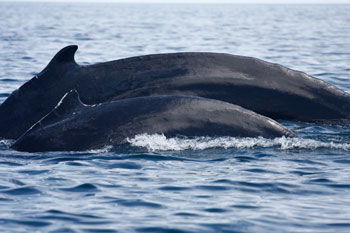 We continued to take identification photos from both humpbacks and fin whales. The fin whale groups observed ranged from single animals to a group of six we saw towards the end of the day. There were so many animals in the area that it became a challenge to keep track of what whales were still underwater and what whales we were seeing at the surface. Another notable sighting was a cow and calf humpback whale pair that we observeed several times over the course of the day. In addition to identification photos of the pair, we were also able to collect a biopsy sample from the calf. This, along with the other biopsy samples collected from minkes and fin whales, will provide valuable genetic data, such as the sex of individuals and toxin analysis data. Making the most of the great weather conditions and presence of whales, we stayed out on the water collecting data for as long as there was daylight. To end the day, just as we were about to leave for Mingan a group of about 50 harp seals and 30 harbor porpoises passed by our boats! After an exciting and productive day we left the whales, seals and porpoises and headed back to Mingan with a picturesque view of the setting sun.