The 2011 season is now well under way. Here we want to introduce some of our ongoing and new research projects. In our 33rd season we continue to monitor the local population of humpback, fin and minke whales in the Gulf of St. Lawrence. MICS is also the curator of the North Atlantic blue whale  catalogue and our associated long-term research program will continue to photo-identify and biopsy previously unknown animals. Photo-ID and biopsy data is used to estimate population parameters such as abundance, survival rates and reproduction. All genetic samples are sent to Drs. Per Palsboll and Martine Bérubé in Stockholm, Sweden.

Katy Gavrilchuk, a Masters degree student at Laval University in Quebec, is currently conducting a multidisciplinary research project that measures and compares stable isotopes (Carbon and Nitrogen) in hundreds of skin samples from blue, fin, humpback and minke whales. This technique is used to identify the trophic levels used by each whale species. Since we do not sample the water column for prey, it is not clear if, for example, humpback and fin whales are competing or targeting different prey species. Katy’s primary results are interesting and you will learn more at the upcoming Society for Marine Mammal conference in Tampa, FL. The blubber samples are used to measure contamination levels, and we are especially interested in the maternal transfer between females and calves. While over 100 humpback samples are awaiting funding for processing, we are still targeting fin and blue whales for this project. Further blubber samples are used for hormonal analysis that allow pregnancy testing. We are especially interested in why so few blue whales calves are observed in the St. Lawrence.

Last year we started taking additional pictures of individual whales, especially near the head and peduncle (and the leading edge of the fluke of humpback whales).These efforts are part of a new health assessment study to estimate the rates of fishing gear entanglements and ship collisions for each study species. This method was first applied by Dr. Jooke Robbins (Provincetown Center of Coastal Studies) and she provided evidence that entanglement rates in some whales are much higher than previously thought, since most cases are not witnessed. Answering questions for this project requires photographing a large proportion of the population in order to establish a representative sample size and will likely take a few years before we get primary results. 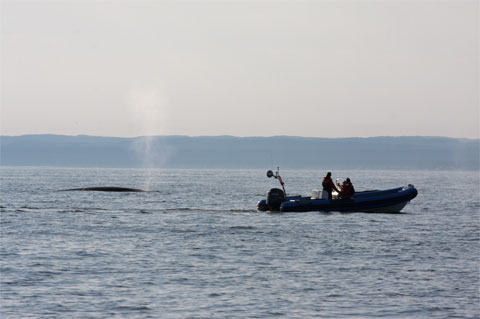 Dr. Brian Kot from Texas A&M University is here for a second year to continue his new project investigating interactions between minke whales and experimental fishing gear. He is testing for behavioural responses of minke whales to different types of ropes and buoys. In addition to surface observations of whale behaviour near experimental ropes and buoys, he also uses a remote sensing system to simultaneously monitor oceanographic conditions, record underwater whale sounds, and capture underwater video of whales swimming near ropes. Results from his project will hopefully contribute new information toward more effective conservation and management of marine mammals and fisheries.

It is still a mystery where blue whales spend their winters and, for the second consecutive year, a collaborative team between MICS and DFO Canada will try to place datalogging tags on several individual blue whales with the hopes that these tags will stay attached for several months until the whales leave the St. Lawrence. No blue whales have been sighted yet this summer but krill appears to be abundant so we hope the whales will arrive soon.

In mid-July, we will be joined by a research team from the Sea Mammal Research Unit (SMRU) at the University of St. Andrews, Scotland. One of the main objectives of this team is to investigate how baleen whales locate their prey. In collaboration with  Rene Swift, we will attach non-invasive suction cup tags to whales to help determine their foraging movements under water. This will be overlaid with sonar data that characterizes local prey distribution. The SMRU team will be here until the end of the summer and hopes to tag multiple species.