We are already in August!!! Time to catch up MICS news from our 30th season! This year, the research station began its activities in Longue-Pointe-de-Mingan while the last traces of snow were still melting in early June. Boats were readied, including the new 6,50m Scirocco from Sillinger, we prepared the interpretation center, and welcomed the first interns. Having a smaller than usual number of team members this year to carry out these intense activities, partly explains our slowly flowing MICS news.

Preparations for celebrating MICS 30th anniversary were added to daily tasks, and so you could easily imagine the feverish, but also festive atmosphere. As expected, the anniversary was a success, with more than 80 friends and guests who came to celebrate this moment with Richard Sears and the team members! Special thanks to all those people, near and far who have been involved in these preparations especially the Paul Reddick Blues Band, which allowed us to jump and jive to their fantastic music all night. Have sponsored and/or supported this event : Caisse populaire Desjardins Mingan-Anticosti ; Société des Alcools du Québec; Municipalité de Longue-Pointe-de-Mingan; Aluminerie Alouette; Air Labrador; Canadian Whale Institute; Poissonerie Poséïdon; Sue Smith; et P.A. Paquet. 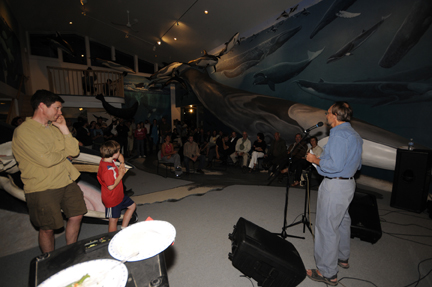 Richard Sears speaking to the guests

Life at the museum

At the end of the 2007 season, Daniel Grenier, artist and former team member, added his final touch on the museum's walls. Daniel achieved an impressive work of art, which illustrates all cetaceans living in the Gulf of St. Lawrence. He also finished a sculpture of "Dune", a well-known Finback Whale from the Mingan study area. This last major piece has added an impressive new presence to an already fascinating depiction of the natural history of marine mammals.

to see him working
click on the picture
(Beware-big file!) 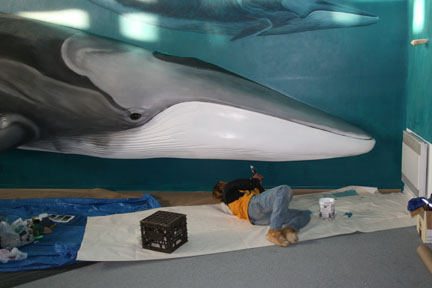 This year, tourism is noticeably down from previous years partly due to the high cost of gas and Quebec's 400th anniversary. These factors have severely limited the number of visitors to the North Shore. Our biologists had to carry out extensive surveys before finding good concentrations of animals at the eastern edge of our study area along Anticosti Island. Up until now we have observed sixty-two known Humpback Whales, at least one-hundred Finback Whales, 50+ Minke Whales, 20 White-beaked Dolphins, a myriad of Harbor Porpoises, and many species of birds. Some of the known Humpbacks represented were" Bolt" (H102), "Moby" (H263), "Brax" (H044), "Soledad" (H502) and her calf, "Winston" (H069), "Ebéne" (H042) and calf, and "Easy Rider" (H585). The known finbacks include "Peanut" (F025), "Dune"(F252), and "Curly" (F002).

On June 22nd, two members of the MICS team were sent to Gaspésie for a 3-week period, in order to assess the abundance of animals there, especially Blue Whales. After an 8-hour crossing of the Gulf in a thick fog (300 meter visibility) the team finally reached the Gaspe coast. This region is an important research area, because many species of cetaceans, two of which are the Blue and the Humpback Whales, first appear there upon return from their wintering areas. Gaspe acts as an important feeding stop for some individuals before they head further North or East in the St. Lawrence to other feeding sites.

Preliminary results from this field expedition were very promising. In total 22 Blue Whales, 24 Humpbacks, and about 20 Finbacks were observed. Most Blues were known individuals and one-B206 had not been seen since 1988, when it was spotted for the only other time in early October off Godbout. B206 is easily recognized by the lack of a dorsal fin, removed by contact with fishing gear or a vessel, which has left distinctive scarring. Another blue whale sighting of note was female B271 accompanied by a calf. Blue whale calves are rarely seen in the St. Lawrence population with only 19 seen over the 30yr study. In addition this was B271's second calf, the first was seen by her side off Gaspe in 1994. Earlier this season B197 was observed with a calf in the Estuary. Two in one season is remarkable. At the same time the Fin and Humpback whales are reproducing at a much higher rate- 14 Finback and 9 Humpback calves already in 2008- and that is another story.

On July 9th, the famous Fleuret (H009)-born in 1982 to H008 Pseudo, was seen with her new calf and seventh in the time we have known her. She was in good company with other well known Humpbacks including Quill (H168) and her fourth calf, males Freckles (H006) and St.Laurent (H152), as well as females Moby (H263) and Irisept (H492). We observed the remarkable displays for which Humpbacks are known exhibiting flukes and flippers. 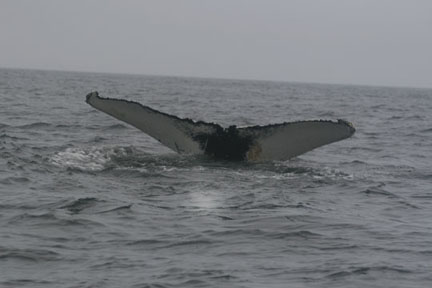 Fleuret, seen with her 7th calf

On July 16th we saw Quill again during our return crossing to Mingan, Quill proved to be faster than we were in getting back across the St. Lawrence this time on a sunny day with clear visibility. In the Honguedo Straight along with Quill were about 10 Humpbacks, 1 Blue and approximately 15 Finbacks, which added to our quota of 19- an efficient day!

The team greatly appreciates the help provided by Croisières de la Baie de Gaspé and special thanks to Gilles Shaw and his team at L'Auberge Internationale Forillon for warmly welcoming and helping us, even once back in Mingan! Thanks to Sébastien Nadeau and his colleagues from Parks Canada for easy access to the Parc Forillon.

Year 2008 would be a memorable one in MICS history. Thomas Doniol-Valcroze submitted and defended his PhD thesis successfully on the habitat use of four rorqual whale species in the Gulf of St. Lawrence. Christian Ramp also submited his PhD thesis, which focuses on the population dynamics and social structure of Humpbacks Whales. Julien Delarue finished his Masters degree, during which he compared the vocalizations of male Finback whales found in the Gulf of Maine to those in the Gulf of St.Lawrence. Finally, Brian Kot is now writing his PhD thesis, on the feeding bio-mechanics of Minke Whales.