Our annual research expedition to Gaspésie started today. Team members Valentine Ribadeau Dumas and Petra Reimann crossed the Gulf of St. Lawrence to work on the Blue and Humpback Whales that stopover near the tip of the Gaspé peninsula to feed before moving on. Past expeditions in Gaspésie have resulted in interesting data as to the movements of large rorquals in the Gulf. Our work off Gaspé has also yielded a high number of new additions to the catalogue. Last year, 12 Blue Whales that had never been seen before were photographed during our two expeditions along Gaspésie in July and in September. This year, during their seven-hour crossing, Valentine and Petra observed a pod of 40 Pilot Whales. This species is rarely seen in coastal waters and the trip to Gaspé offers one of the rare opportunities to observe them. 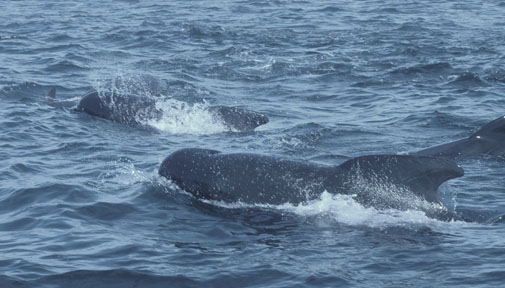 MICS would like to thank Gilles Shaw of the Forillon International Youth Hostel for his generous help and support during the organization of the trip, the Croisieres Baie de Gaspé team for contributing their sightings and pointing us in the right direction, as well as Forillon National Park for allowing us to use their docking facilities!

On this side of the gulf, the number of individuals sighted keeps increasing steadily. Finback stars Baby-fin Nelson (F016) and Zipper (F186) have been seen as well as approximately 40 other Fin Whales off Anticosti Island. Zipper is easily identifiable because of a large scar on her right side. Probably caused by a boat propeller, Zipper’s scar has changed very little since she was first observed in 1994 by the GREMM (Groupe de recherche et d'education des mammiferes marins) in the Tadoussac area. Several Humpback Whales have also arrived in the area, including regulars such as ÃÂDog-EarÃÂ (H141) and ÃÂLa SouffleuseÃÂ (H531).

Zipper F186. This Finback is relatively new to our research area and is usually observed in the estuary.

Our fieldwork has finally yielded the large rorqual concentrations that we had been looking for! About 20 Finbacks were found along Anticosti Island. These impressively large animals (the second largest animal ever to have lived on the planet!) often feed together in large groups, sometimes as many as 15 individuals surfacing and diving synchronously. Our Fin Whale observations in the past two years have been clearly above average and we expect to see many more of these in the following weeks. Our Finback catalogue now holds over 450 individuals.

There was a lot of excitement along the beach last week in Longue-Pointe-de-Mingan. A juvenile Humpback Whale was spotted less than 100 metres from shore. The whale was feeding on capelin, a small fish that spawns on sandy beaches. Several times throughout the afternoon it was seen lunging through the surface of the water with its mouth wide open! This type of surface-feeding behaviour is more regularly seen in Minke Whales so close to shore. A few days later, another juvenile humpback was also seen feeding just in front of the station. Photographs of the two whales' flukes not only confirmed that these were two different individuals, but also that they are new to our catalogue!

Tic-Tac-Toe and her calf.

During one of our outings offshore, we observed nine more Humpback Whales including two mothers with their calves! We have rarely seen so many individuals of this species so early in the season. One of the two mothers is Tic-Tac-Toe (H509). This is her first calf since she was first observed in the estuary in 1999. Calf observations are amongst the most important sightings for us. As of yet, the only reliable way for us to know an individualÃÂ’s age is to observe it as a calf. About 85 of the 692 humpbacks in our Gulf of St. Lawrence catalogue were first observed as calves. This proportion is much higher when we take into account the calves that have been seen in our main study area. Over 60 of the 234 different humpbacks observed in the Mingan-Anticosti region were seen as calves. If Tic-Tac-Toe's calf is a female, we may see her with a calf of her own as early as 2016! 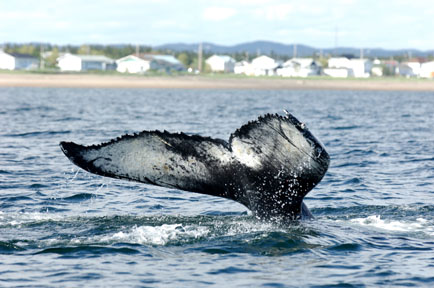 One of the Humpbacks in front of Longue-Pointe-de-Mingan (Photo: Brian Kot).