For a second year in a row summer whale sightings were low, with only a handful whales observed by our team. The season finally started kicking on August 9th when we sighted in just one day at least 6 humpbacks, 3 minkes, 2 fin-whales and our first blue of the year!

From that date, individuals of the different St-Lawrence whale species have been sighted almost every day and we have enjoyed some very pleasant calm sea days, where even harbour porpoise stand out at distance. Unfortunately, no Right whales have been sighted yet, despite our extensive coverage at sea, but we continue to look and hope some individuals of this rare species.

Here are some highlights of the past few days:

Cedille – H144, a humpback female was spotted on August 11th. First identified in 1988, she is sighted most years in the St Lawrence. In addition she has given birth to at least 7 calves and is probably a grandmother to some of the younger humpbacks who have increased members of this species found in the St Lawrence.

It takes as many as 10 years for baleen whales to become sexually mature and when pregnant have a 10-11 month gestation period. And even if whaling has almost completely stopped, whale still face threats from fishing gear, vessel collisions, human-caused noise & traffic disturbance, as well as persistent pollutants. Individuals such as Cedille are vital to the health of local populations.

On August 17th, we had encountered a large, mature male blue whale known as Pulsar - B036, identified for the first time in 1981. He has been sighted several times mostly in the Estuary; however, it is the first time our team has spotted him in the Jacques Cartier Passage. The fact that he is outside his more regular range may indicate a need to travel further afield to locate the food he was accustomed to find in the Estuary.  Increased dispersal of baleen whales has been a general trend over the last number of years.

Last but not least: on August 10th, a blue cow-calf pair was reported by the GREMM in the Estuary at the level of Bon-Désir Cape between Les Bergeronnes and Les Escoumins.

The female is Jawbreaker – B246 well known to the St Lawrence and in the Estuary in particular.  Her calf 14.59m long with a 3.55m wide tail might be approximately 6 months old and is her second known calf.  The last was observed during the blue whale baby boom of 2018.

Named by one of our former team members Catherine Berchok, because of a large round circle that reminded her of the popular hard candy, “Jaw-Breaker” was identified for the first time in 1991 and has been sighted in the area almost every year since.

Easy to recognize with the white scarring located on the leading edge of her flukes and her white dorsal fin, she is one of the approximately 18% of St. Lawrence blue whales that raises their tail when they dive.

Measuring 22,23m long with a 5,3m wide tail, she is not the largest of the females in the estuary. However, it doesn’t stop her from clearly indicating her distaste and irritation towards unwelcomed male’s close approach. RS recalls sighting her a few years ago being tended by Pulsar mentioned above. After a number of paired surfacing, she emphatically indicated that he should leave her side.

A new Blue cow-calf pair is always welcome: Blue whales are classified as endangered world-ide by the IUCN Red List, and in 44 years, it is only the calf 35th identified in the eastern Canadian waters.

Hopefully the rest of season will bring more good news and data to work on. Stay tuned! 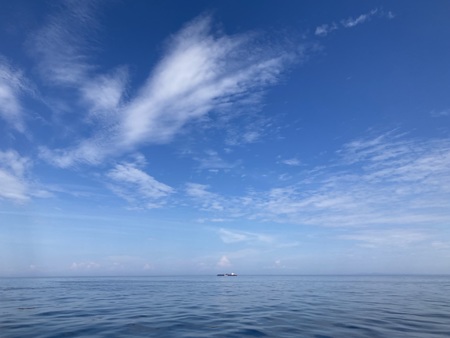