Research Expeditions in the Mingan Archipelagos ( Mid-June until Mid-September) 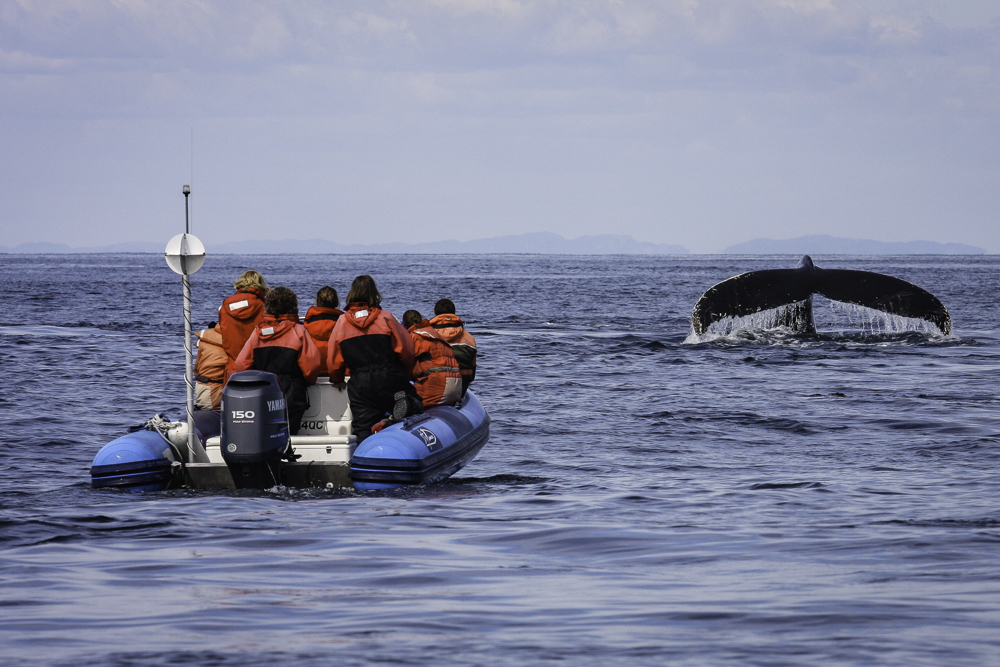 Our research station is located in Longue-Pointe-de-Mingan, a village of approximately 600 people, on the North Shore of the Gulf of St-Lawrence. The station includes a museum describing the natural history of local cetaceans and research facilities. The Gulf of St. Lawrence is a highly productive feeding ground that supports many of the rorqual whales including minkes, humpbacks, fins, and blues. Many other smaller marine mammals are seen large numbers throughout the region such as harp and grey seals, harbour porpoises, and Atlantic white-sided dolphins. During the summer, a large puffin colony nests on Île aux Perroquets, just a few miles offshore. Plenty of gannets, guillemots, petrels, razorbills, and eider ducks can be seen throughout the islands as well. 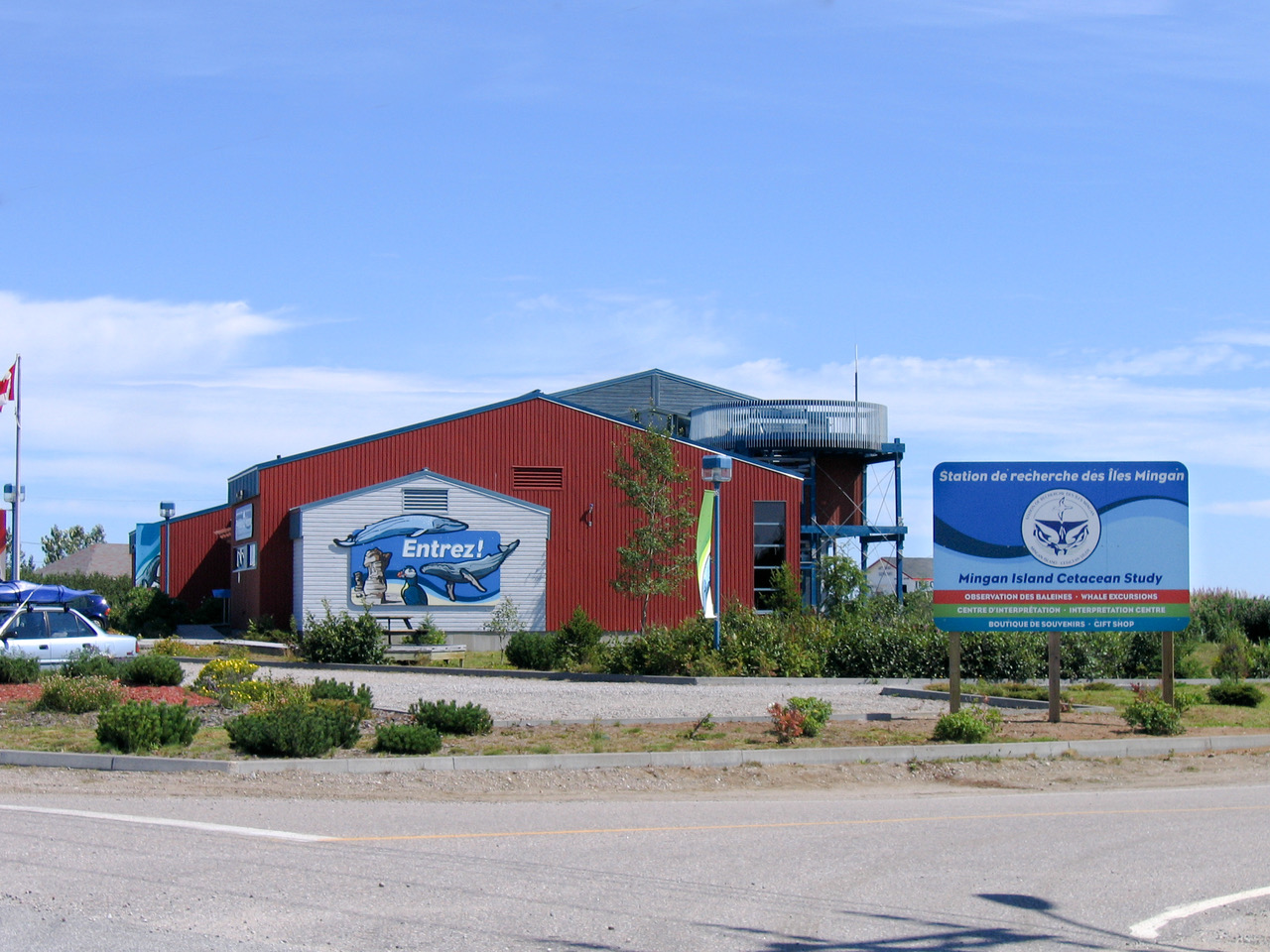 The research station in Longue-Pointe-de-Mingan

MICS has been studying blue whales and other rorquals for over twenty-five years in the Gulf of St- Lawrence. The method of photo-identification for blue whales, used today by biologists in the field, was developed by MICS and has helped us catalogue over 400 individual blue whales in the Gulf of St. Lawrence. MICS has also compiled extensive photo-identification catalogues of the other species in the area: our fin whale catalogue contains over 350 individuals, and our humpback catalogue contains over 600 individuals. We also biopsy the rorqual whales of the region in order to determine their sex and to analyze the blubber for toxins. 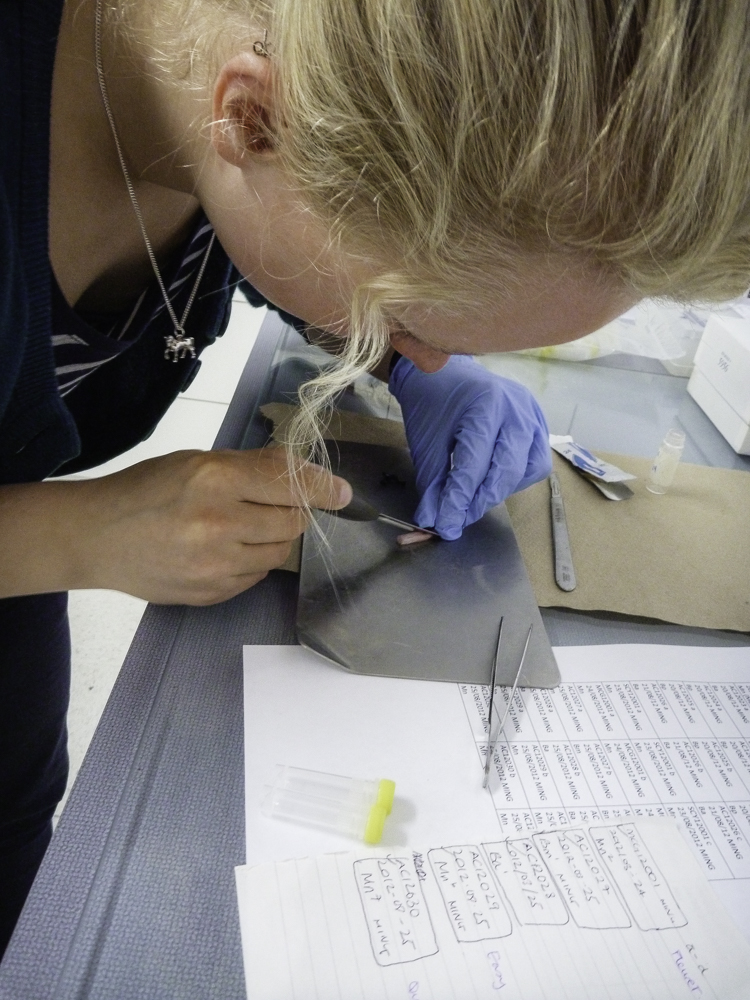 Team member and researcher preparing a blubber sample for preservation

Price for the North Shore expeditions 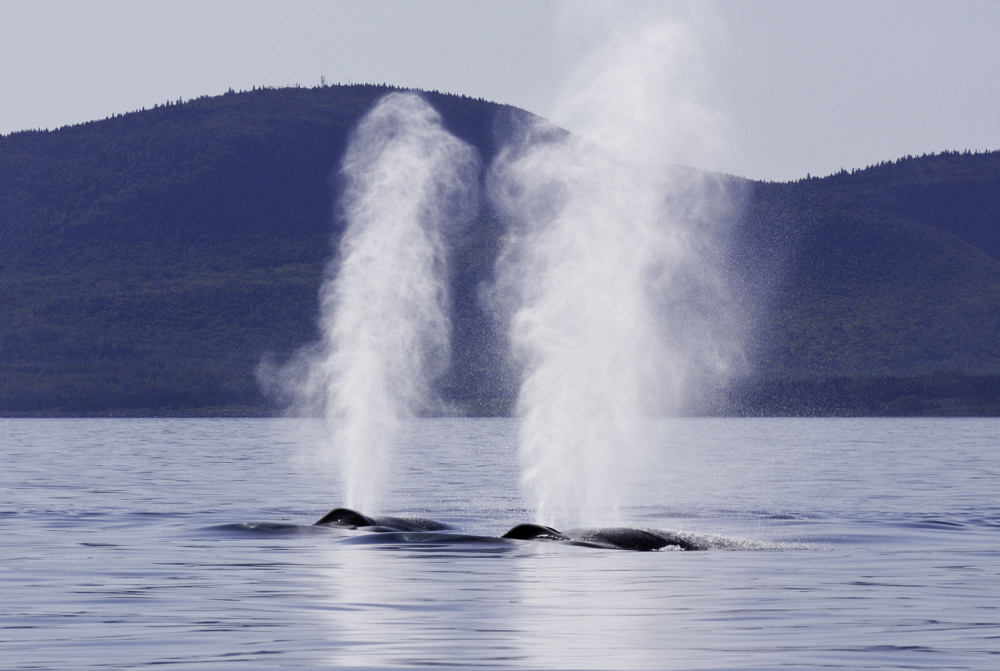 The eastern tip of Gaspé is the first place we find whales early in the field season. Blue, fin, minke and humpback whales can be sighted there as early as April but are more regularly seen from May through July. The eastern region of Gaspé is where the whales feed early in the season before moving further into the St. Lawrence to the west and to the north. Off Gaspé one can regularly observe breaching humpback whales, as well as surface feeding of the above-mentioned species. Additionally, it is not uncommon to observe Atlantic white-sided dolphins, harbour and grey seals, harbour porpoises, and occasionally right whales, all of which come to prey on the swarms of copepods which live in these nutrient-rich waters. 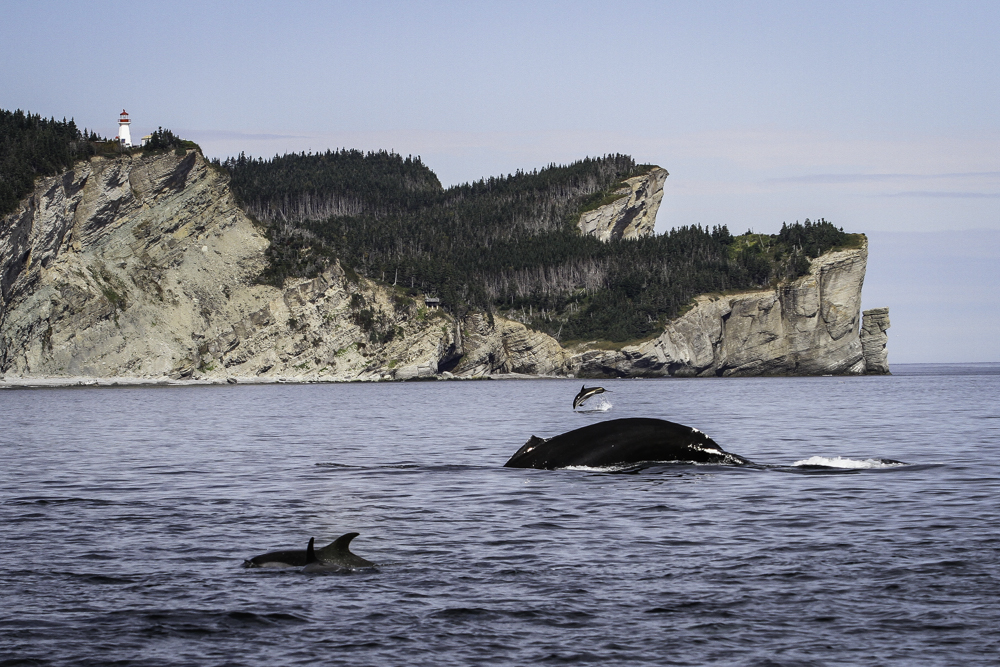 This magnificent region, which offers an abundant supply of food for all the species that have discovered its rich waters, is one of the prime sites for observing marine life in the St. Lawrence. The striking Forillon National Park juts out into the St. Lawrence, forming one of the picturesque facades of Gaspé Bay, a magical place in which to observe and study numerous species of marine mammals. The observations we carry out in this region are essential in determining dispersal and distribution of individuals in the St-Lawrence each year. The research off the Gaspé Peninsula complements the work we do from June to September in the Mingan Island region, in July off Blanc Sablon, and during August and September in the St-Lawrence Estuary. These combined studies enable us to form a more accurate picture of marine mammal ecology in the St-Lawrence. A yearly rendez-vous not to be missed, join our Gaspé research sessions, assist us in our studies, and contribute to this research effort! 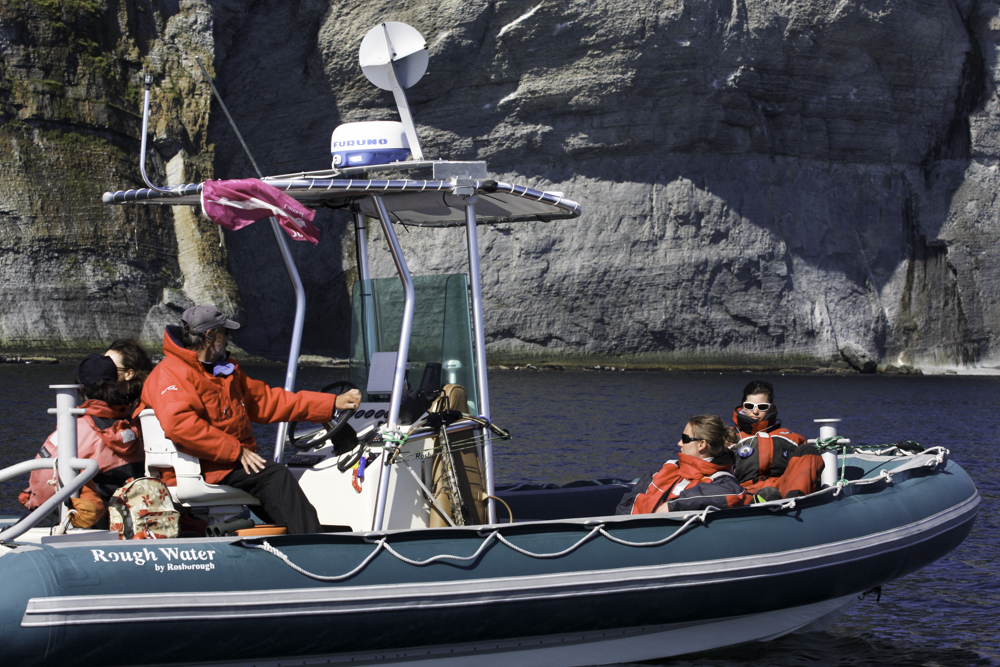 Price for the Gaspe expeditions

Research Adventures in the Azores Archipelagos (End-April until Beginning-May) 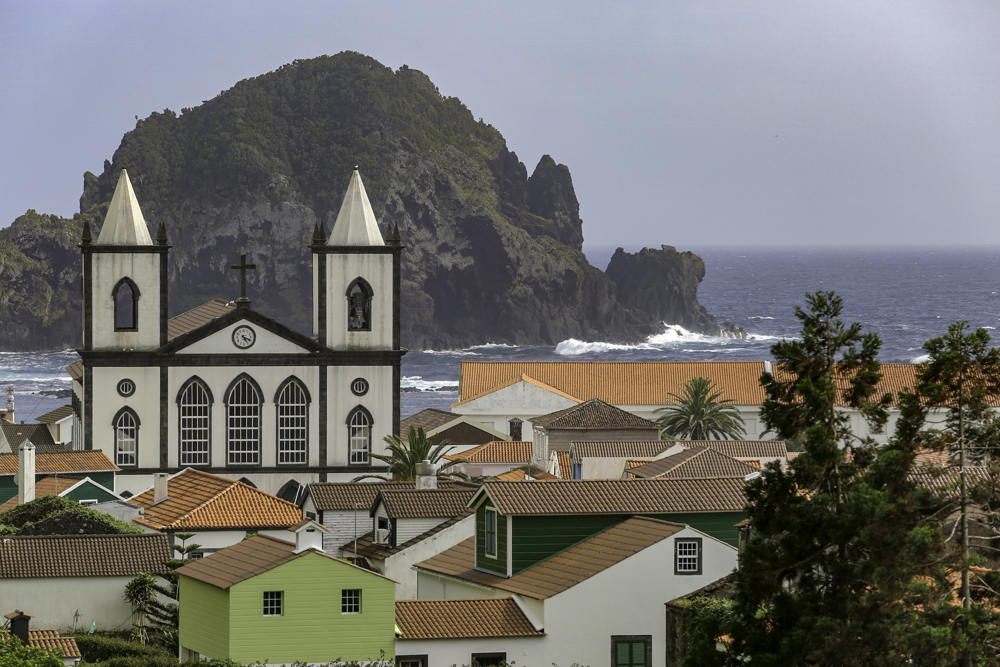 The Azores have a generally sunny, mild climate with occasional showers. Because they are in the middle of the Atlantic their waters include many resident and transient species. This session is geared to learn more about eastern North Atlantic blue whales, who pass by the Azores on their way North to Icelandic and Norwegian waters. Our fieldwork includes photo-identification, behavioural observations, and acoustic recordings with regard to the study of eastern North Atlantic blue whale ecology. Because the focus is on blue whales, when they are present we will concentrate our efforts on blues and not spend as much time with other species. The Azores offer a very rich open ocean environment created by mixing of various water masses against the islands. We use 8-9m hard-bottom inflatables and require a minimum of 5 participants for us to offer this program, while groups cannot exceed a total of 9 participants. 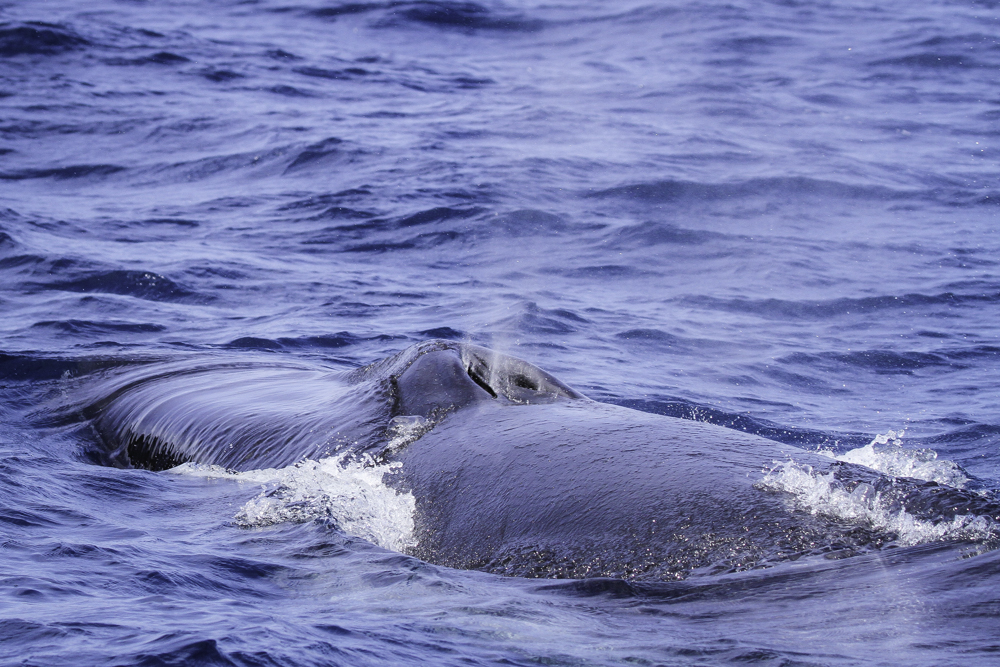 A blue whale surfacing to breathe

Want to find out more? Read about what it's like to spend a week in the Azores with Richard Sears in this blog written by a former participant.

Price for the Azores expeditions