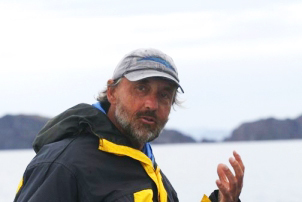 Richard Sears, a Franco-American, founded Mingan Island Cetacean Study (MICS) in 1979 to study marine mammals in the St Lawrence, with an emphasis on baleen whales.

At eighteen, he took part in an SEA sail-training expedition in oceanography aboard the schooner Westward, from Puerto Rico to Boston, via the Bahamas, Bermuda and eastern seaboard. It is during this trip that he approached whales for the first time and took part in several oceanographic projects, including coral reef fish ecology.

In 1976, after having completed his university studies in biology in Maine, he worked for the Woods Hole Oceanographic Institution at the Matamek research station, just east of Sept-Iles, on the Gulf of St. Lawrence, studying Atlantic salmon ecology and behavior. During the summer of that year, he was able to carry out marine mammal observations in Moisie Bay and saw his first blue whales.

From 1976-1979 he took part in the College of the Atlantic’s marine mammal surveys based on Mount Desert Rock off the coast of Maine, as well as working aboard whale-watching vessels in Massachusetts, contributing data to the western North Atlantic Humpback Whale catalogue. He worked with and learned from the pioneers of whale research: David Sergeant, Steven Katona, William Schevill, William Watkins, and Roger Payne - all great sources of knowledge and inspiration. From them, he learned that in order to know whales, there is no better way than to spend a lot of time at sea.

It is with this motivation that Richard returned to Matamek and Mingan in 1979 to study marine mammals, and this adventure in research began. The work initiated in 1979 became the first long-term blue research project on the planet and the longest continuous data collection effort for cetaceans in the St Lawrence.

In 1982, based in Loreto, Mexico, he started the first long-term study of blue whales in the Sea of Cortez.  From 1996-2002 he traveled to Iceland and in partnership with Gisli Vikingson collected the first blue whale identification photographs and biopsies off western Iceland. In 1998 during his first trip to the Azores and almost each year since, he collected data on blue whales passing by the archipelago in the spring, which has contributed to a catalog of more than 725 blue whales from the northeast Atlantic.

In 1997 he took part in the first cetacean survey off South Georgia following the end of whaling there in 1965. In addition, he has worked off Panama, Costa Rica, New Caledonia, Greenland and Baffin Island, the Mediterranean, and the Marquesian Islands.

Decades later, his passion remains, and Richard continues to be involved in blue whale research in the North Atlantic, where his main interest lies with distribution, movements and habitat use of blue whales. In the St Lawrence, his main interests focus on blue and fin whale social interactions and habitat use. He hopes the MICS Station will continue to welcome interns and graduate students, and push new frontiers in cetacean research.

One of his greatest feelings of achievement is that MICS has been able to make it to its 40th anniversary and can pursue its work into the future. His greatest frustration is the water’s surface and the visibility beneath!